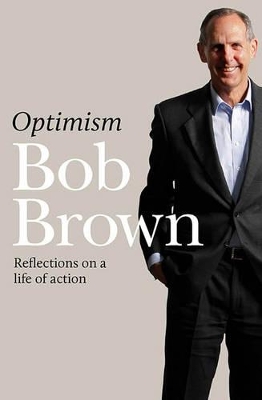 Optimism : Reflections on a Life of Action

Description - Optimism : Reflections on a Life of Action by Bob Brown

In Optimism, Bob Brown shares with us his stories and insights from throughout his public and private life, that reveal the events that have made an impression, the ideas that have caught his imagination, and the people that have stayed in his thoughts. This book reflects on the simple things, the moments that are meaningful, and the big questions that have concerned Bob Brown and inspired him to achieve. It is a powerful book as well as a meditation on the great and the small. Inspirational, compassionate, outraged, Bob Brown's stories are rich with metaphor, entertaining and full of warmth. A great promoter of activism he is keen for all to experience life as richly as he has. Although he has seen much of the world through the prism of politics he still believes that there is reason to believe that the changes he has pursued can be made and will be for the better. His stories reveal a complex man with a quick wit and a joy for life. "It is a fortunate life if a person feels more optimistic than ever before. That's me." Bob Brown

Other Editions - Optimism : Reflections on a Life of Action by Bob Brown 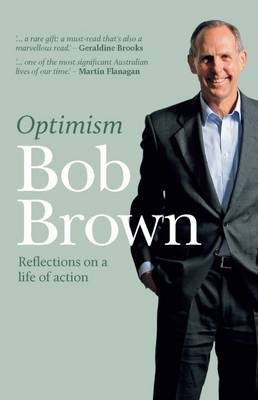 Book Reviews - Optimism : Reflections on a Life of Action by Bob Brown

» Have you read this book? We'd like to know what you think about it - write a review about Optimism : Reflections on a Life of Action book by Bob Brown and you'll earn 50c in Boomerang Bucks loyalty dollars (you must be a Boomerang Books Account Holder - it's free to sign up and there are great benefits!)

`A man of conviction, a thoroughly honest man, a man of principle.' Alan Ramsey Brown led the Australian Greens from the party's foundation in 1992 until April 2012.and resigned as leader of the Greens in 2012 and from the Australian Senate in June 2012. In 1978 Bob was appointed director of the Tasmania Wilderness Society and led the campaign to prevent the construction of the Franklin dam. He spent 19 days in prison and on the day of his release, in 1983, he became a member of Tasmania's parliament. Bob was elected to the Australian Senate in 1996. From 2002 to 2004, when minor parties held the balance of power in the Senate, Brown became a well-recognised politician. He was reelected in both 2001 and in 2007. Bob Brown was also the first openly gay member of the Parliament of Australia, and the first openly gay leader of an Australian political party. Bob lives with his partner Paul in Tasmania and travels widely. Bob has published a number of books including both photographic and poetry books. He has also won many awards, including from the United Nations.

A Short Introduction to Understanding and Supporting Children and Young People Who Self-Harm
Carol Fitzpatrick
$31.35 $31.99
More Books By Bob Brown
View All

What Happened to Mary: A Novelization from the Play and the Stories Appearing in the Ladies' World
$99.07 $110.08