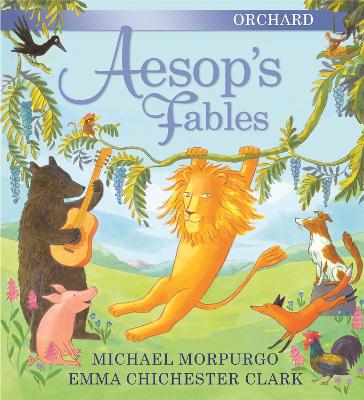 A timeless collection of over twenty of Aesop's best-loved fables, including favourites such as The Hare and the Tortoise, Town Mouse and Country Mouse, Dog in the Manger and The Lion and the Mouse. The tales are retold with warmth and humour by former Children's Laureate Michael Morpurgo and brought to life by Emma Chichester Clark's exquisitely playful and distinctive artwork.

» Have you read this book? We'd like to know what you think about it - write a review about Orchard Aesop's Fables book by Michael Morpurgo and you'll earn 50c in Boomerang Bucks loyalty dollars (you must be a Boomerang Books Account Holder - it's free to sign up and there are great benefits!)

Michael Morpurgo has written over 95 titles and won, or been shortlisted, for numerous awards, including winning the Whitbread for The Wreck of Zanzibar, the Smarties Prize for The Butterfly Lion, The Children's Book Award for Kensuke's Kingdom and several shortlistings for the Carnegie Medal. Michael's books have also been translated into over 20 languages and have won him international awards such as The Prix Sorciere in France, The Best Book of the Year in the US and the Silver Pencil in Holland. And of course, Michael's wonderful writing has now won him the title of Children's Laureate. Alongside his writing, Michael has found time to set up and run, with his wife, a charity called Farms for City Children. For this they were both awarded an MBE. Michael lives on a farm himself in Devon.