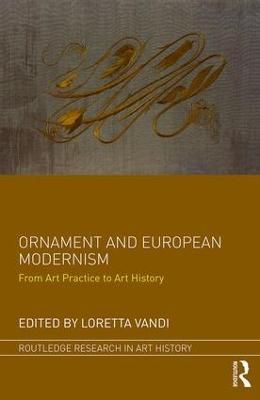 From Art Practice to Art History

These in-depth, historical, and critical essays study the meaning of ornament, the role it played in the formation of modernism, and its theoretical importance between the mid-nineteenth century and the late twentieth century in England and Germany. Ranging from Owen Jones to Ernst Gombrich through Gottfried Semper, Alois Riegl, August Schmarsow, Wilhelm Worringer, Adolf Loos, Henry van de Velde, and Hermann Muthesius, the contributors show how artistic theories are deeply related to the art practice of their own times, and how ornament is imbued with historical and social meaning.

» Have you read this book? We'd like to know what you think about it - write a review about Ornament and European Modernism book by Loretta Vandi and you'll earn 50c in Boomerang Bucks loyalty dollars (you must be a Boomerang Books Account Holder - it's free to sign up and there are great benefits!)