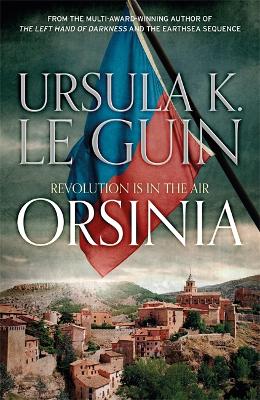 Among the less-traveled mountains and plains of Central Europe, a little east of Austria perhaps and north of Slovenia, lies the old kingdom of Orsinia. A land of forests and quiet farmlands and towns, with its capital city Krasnoy on the broad Molsen River, Orsinia has always found itself, like all the countries of Europe, subject to forces beyond its borders. Yet, cast as they are in the shadow of tyrannies both Western and Eastern, the lives and dreams of its free people are no less important than the great arguments of Europe's emperors and dictators. Here then are those lives: in tales of romance and blood-lust, hope and fear, freedom and tyranny, passion and despair. Tales of love, of life and of death and - amidst the great 19th-century rise of liberalism and nationalism - a tale of revolution against the might of the Hapsburg Empire. This is Orsinia and these are her stories.

» Have you read this book? We'd like to know what you think about it - write a review about Orsinia book by Ursula K. Le Guin and you'll earn 50c in Boomerang Bucks loyalty dollars (you must be a Boomerang Books Account Holder - it's free to sign up and there are great benefits!)

Ursula K. Le Guin is one of the finest writers of our time. Her books have attracted millions of devoted readers and won many awards, including the National Book Award, the Hugo and Nebula Awards and a Newbery Honor. Among her novels, The Left Hand of Darkness, The Dispossessed and the six books of Earthsea have attained undisputed classic status; and her recent series, the Annals of the Western Shore, has won her the PEN Center USA Children's literature award and the Nebula Award for best novel. In 2014 Ursula Le Guin was awarded the National Book Foundation Medal for Distinguished Contribution to American Letters. She lives in Portland, Oregon.Read more at http://sf-encyclopedia.com/entry/le_guin_ursula_k

A Preview for this title is currently not available.
More Books By Ursula K. Le Guin
View All