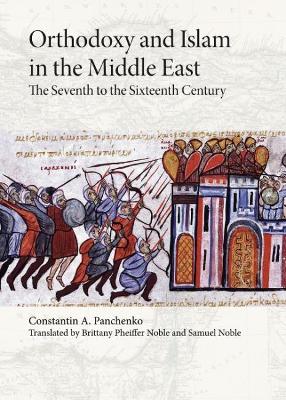 Orthodoxy and Islam in the Middle East: The Seventh to the Sixteenth Centuries

Description - Orthodoxy and Islam in the Middle East: The Seventh to the Sixteenth Centuries by Constantin A. Panchenko

Conflict or concord? Histories of Islam from its early seventh century beginnings in Arabia often portray its explosive growth into the wider Middle East as a story of struggle and conquest of the Christian people of Greater Syria, Palestine and Egypt. Alternatively these histories suggest that as often as not the conquerors were welcomed by the conquered and their existing monotheistic faiths of Christianity and Judaism tolerated and even allowed to flourish. In this short but in depth survey of the almost nine centuries that passed from the beginning of the spread of Islam up to the Ottoman Turkish conquest of Syria and Egypt beginning in 1516, Constantin Panchenko offers a more complex portrayal that opens up fresh vistas of understanding of these centuries focusing on the impact that the coming of Islam had on the Orthodox Christian communities of the Middle East and in particular the interplay of their Greek cultural heritage and experience of increasing Arabization. This work is drawn from the author's much larger work, Arab Orthodox Christians Under the Ottomans, being an updated and expanded version of the first chapter of that book which set the historical context for the period after 1516. It will deepen the readers understanding both of the history of the Middle East in these centuries and of how the faith of Orthodox Christians in these lands is lived today. AUTHORS: Constantin A. Panchenko is an Associate Professor, Department of Middle and Near East History, Institute of Asian and African Studies, at the Lomonosov Moscow State University. He is the author of about 100 academic publications, including two monographs, collections of essays, articles and abstracts on the history of the Middle East. His major sphere of interest is the history of the Christian Arabs, particularly the Middle Eastern Greek Orthodox community in the Middle Ages and Early Modern period. Brittany Pheiffer Noble holds an M.A. in Religion from Yale University School of Divinity and a doctorate in Russian Literature from Columbia University, New York. She is the co-translator with Samuel Noble of Arab Orthodox under the Ottomans:1518-1831, Constantin Panchenko. Jordanville, NY: Holy Trinity Seminary Press, May, 2016. She lives in Leuven, Belgium. Samuel Noble is a doctoral researcher at the Faculty of Theology and Religion Studies at the Louvain Centre for Eastern and Oriental Christianity at KU, Leuven in Belgium. He is the co-editor of The Orthodox Church in the Arab World: An Anthology of Sources, 700-1700 (Northern Illinois University Press, 2014) and co-translator of Arab Orthodox Christians under the Ottomans: 1516-1831. (Holy Trinity Seminary Press, 2016)

Buy Orthodoxy and Islam in the Middle East: The Seventh to the Sixteenth Centuries by Constantin A. Panchenko from Australia's Online Independent Bookstore, Boomerang Books.

Book Reviews - Orthodoxy and Islam in the Middle East: The Seventh to the Sixteenth Centuries by Constantin A. Panchenko

» Have you read this book? We'd like to know what you think about it - write a review about Orthodoxy and Islam in the Middle East: The Seventh to the Sixteenth Centuries book by Constantin A. Panchenko and you'll earn 50c in Boomerang Bucks loyalty dollars (you must be a Boomerang Books Account Holder - it's free to sign up and there are great benefits!)