Oscar Wilde and the Nest of Vipers

Description - Oscar Wilde and the Nest of Vipers by Gyles Brandreth

Spring, 1890. A glamorous reception is hosted by theDuke and Duchess of Albemarle. All London's haut monde is there, including the Prince of Wales who counts the Albemarles as close friends. Although the heir apparent and the prince of aesthetes are friends, at the party Oscar appears more interested in a young actor, Rex LaSalle, who disarmingly claims to be a vampire.What begins as a diverting evening ends in tragedy. As the guests are about to leave, the Duchess is found murdered in an anteroom, two tiny puncture marks in her throat. Desperate to avoid a public scandal, the Prince of Wales asks Oscar and his friend Arthur Conan Doyle to investigate the crime. What they discover threatens to destroy the royal family . . . and the reputation of Oscar Wilde. 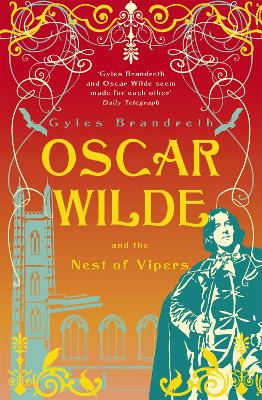 » Have you read this book? We'd like to know what you think about it - write a review about Oscar Wilde and the Nest of Vipers book by Gyles Brandreth and you'll earn 50c in Boomerang Bucks loyalty dollars (you must be a Boomerang Books Account Holder - it's free to sign up and there are great benefits!)