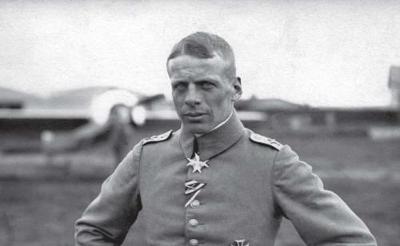 Oswald Boelcke was Germany's first ace in World War One with a total of forty victories. His character, inspirational leadership, organisational genius, development of air-to-air tactics and impact on aerial doctrine are all reasons why Boelcke remains an important figure in the history of air warfare. Paving the way for modern air forces across the world with his pioneering tactics, Boelcke had a dramatic effect on his contemporaries. The fact that he was the Red Baron's mentor, instructor, squadron commander and friend demonstrates the influence he had upon the German air force. He was one of the first pilots to be awarded the famous Pour le Merite commonly recognised as the 'Blue Max'. All of this was achieved after overcoming medical obstacles in his childhood and later life with a willpower and determination. Boelcke even gained the admiration of his enemies. After his tragic death in a midair collision, the Royal Flying Corps dropped a wreath on his funeral, and several of his victims sent another wreath from their German prison camp. His name and legacy of leadership and inspiration live on, as seen in the Luftwaffe's designation of the Tactical Air Force Wing 31 'Boelcke'. In this definitive biography RG Head explores why Oswald Boelcke deserves consideration as the most important fighter pilot of the 20th century and beyond; but also for setting the standard in military aviation flying. This book will appeal to enthusiasts of the German air force, military aviation in general and World War One in particular. AUTHOR: RG Head is a graduate of the US Air Force Academy and was one of the first fighter pilots in Vietnam. He flew 325 combat missions in the A-1 Skyraider, earned the Silver Star, Distinguished Flying Cross and thirteen Air Medals. Earning a PhD in political science, he taught cadets at the Academy, had a second tour in South East Asia and commanded the 90th Tactical Fighter Squadron in the Philippines. His is a distinguished graduate of Pilot Training, 'Top Gun' in Advanced Fighter Training, the National War College and top graduate of the Maxwell School at Syracuse University. He was a Military Fellow at the Council on Foreign Relations in New York City where he published a book, Crisis Resolution. He served in the Office of the Secretary of Defense as the Military Assistant to the Under Secretary for Policy and in the Joint Staff as the Special Assistant to the Director for JCS Matters. When promoted to Brigadier General he served in Italy as Deputy Commander of 5 ATAF and the Air Staff. 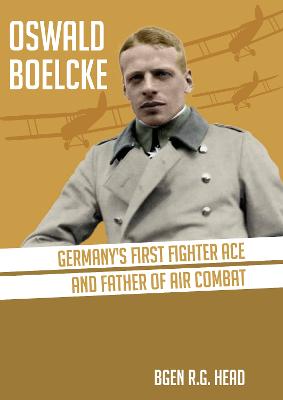 » Have you read this book? We'd like to know what you think about it - write a review about Oswald Boelcke book by RG Head and you'll earn 50c in Boomerang Bucks loyalty dollars (you must be a Boomerang Books Account Holder - it's free to sign up and there are great benefits!)

Brigadier General RG Head graduated from the US Air Force Academy. At Syracuse University he graduated with an MPA and a PhD. He taught political science at the Air Force Academy and edited American Defense Policy. He was a distinguished graduate from the National War College, where he co-authored, Crisis Resolution: Presidential Decision-Making. While a military fellow at the Council on Foreign Relations, he published 'Technology and the Military Balance' in Foreign Affairs. General Head was a fighter pilot flying the F-100 Super Sabre, the A-1 Skyraider, and the F-4 Phantom II, earning the Top Gun award in Advanced Fighter Training. He flew 325 combat missions over Vietnam. Later, he became the squadron commander of F-4s in the Philippines. He was a policy analyst for the Secretary of Defense and the Joint Chiefs of Staff, Washington, D.C. He commanded NATO forces and has over 3,000 flying hours. His second career was as a vice president for Space Operations and Environmental Services, with contracts for US Space Command and the Navy. He retired in 2007 and lives with his wife in Coronado, California, where he captains a racing sailboat and builds models for the San Diego Air & Space Museum.

A Preview for this title is currently not available.
More Books By RG Head
View All