The mention of sport mega-events conjures up images and memories of London 2012 or anticipation of FIFA 2014, the 2016 Rio Olympics and beyond. Indeed, the expanding annual calendar of sport mega-events, both in terms of the bidding process and the actual hosting of the event means that there is rarely time for considered reflection. This is particularly true within the context of neo-liberalism and an obsession with creating world class 'sporting' cities that are propelled by state-private promotional discourses that often silence oppositional voices.

This edited collection focuses on Rugby World Cup 2011 in order to examine the contested terrain of one particular sport mega-event with respect to its economic, political and cultural impact both locally and globally. As an event, the 2011 Rugby World Cup was unique in many ways but perhaps the most notable are the nation's remote geographic location and at just over four million people - its small population. This anthology addresses how the Rugby World Cup has changed since its inception in 1987 including a major shift in the globalisation of the game, professionalization, player migration and television and sponsorship rights. The core of the anthology explores how the event impacted on various segments of New Zealand society: from the state to regions and individual citizens. Collectively the implications are relevant for all who are interested in sport mega-events whether it is from a political, economic, scholarly or policy perspective.

This book was published a sa special issue of Sport and Society.

Other Editions - The Other Sport Mega-Event: Rugby World Cup 2011 by Steven J. Jackson 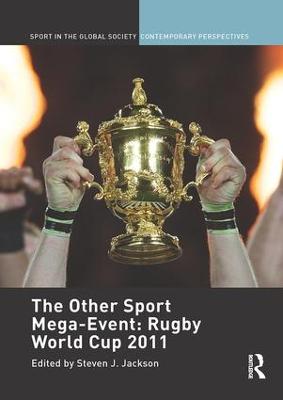 » Have you read this book? We'd like to know what you think about it - write a review about Other Sport Mega-Event: Rugby World Cup 2011 book by Steven J. Jackson and you'll earn 50c in Boomerang Bucks loyalty dollars (you must be a Boomerang Books Account Holder - it's free to sign up and there are great benefits!)

Steven Jackson is a Professor in the School of Physical Education, Sport & Exercise Sciences at the University of Otago, New Zealand and Visiting Professor at the University of Johannesburg, RSA. Currently the past-President of the International Sociology of Sport Association (ISSA), his research focuses on globalization, media and national identity.

A Preview for this title is currently not available.
More Books By Steven J. Jackson
View All