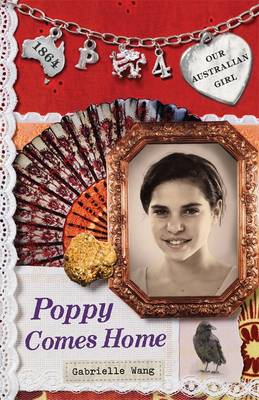 It's 1864 . . . and Poppy, disguised as a lost princess from India, has joined a travelling medicine show. Join Poppy in the final of four exciting stories about a Gold Rush girl who dreams of a better life.

It's 1864 . . . and Poppy, disguised as a lost princess from India, has joined a travelling medicine show. They're about to enter the town of Beechworth, where her brother Gus told her he was heading months before. Poppy is so happy to think that she might find Gus at last! But when she follows the clues, they lead her to the cemetery. Gus couldn't really be there, could he?

Join Poppy in the final of four exciting stories about a Gold Rush girl who dreams of a better life.

» Have you read this book? We'd like to know what you think about it - write a review about Our Australian Girl: Poppy Comes Home (Book 4) book by Gabrielle Wang and you'll earn 50c in Boomerang Bucks loyalty dollars (you must be a Boomerang Books Account Holder - it's free to sign up and there are great benefits!)