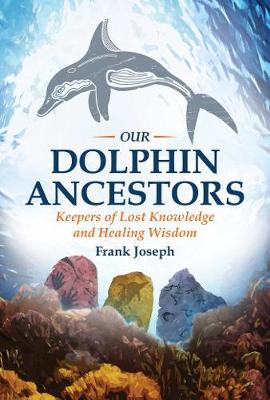 * Explores dolphins' communication with other species and how dolphin therapy has miraculous effects on people with autism, cancer, stroke, and depression

* Explores the connections between dolphins and Atlantis and Lemuria

Wild animals avoid contact with humans, but wild dolphins seek us out to play and socialize, even going so far as to voluntarily rescue people from drowning. What explains this remarkable natural affinity?

Revealing the evolutionary basis for our special relationship with dolphins, Frank Joseph explains how we are both descendants of the same ancient branch of human-ity. Building upon the aquatic ape theory, he details how we both began on land but devastating floods forced our distant ancestors into the seas, where humanity developed many of the traits that set us apart from other primates, such as our instinctive diving reflex and our newborns' ability to swim. But while some of the aquatic apes returned to land, later evolving into modern humans, some remained in the cradle of Mother Ocean and became our dolphin cousins.

Integrating scientific research on dolphin intelligence, communication, and physiology with enduring myths from some of the world's oldest cultures, such as the Aborigines, Norse, Greeks, and Celts, the author examines our physical commonalities with dolphins, including their vestigial thumbs and legs, birth processes, and body temperature. He explores dolphins' uncanny ability to diagnose disease such as cancer in humans and how dolphin therapy has had miraculous effects on children with autism, victims of stroke, and those suffering from depression. He provides evidence for dolphins' different attitudes toward men, women, and children, their natural affinity with cats and dogs, and their telepathic communication with other species, including ours. He explores dolphins' mysterious role in the birth of early civilization and their connections with the Dog Star, Sirius, and Atlantis and Lemuria--a bond still commemorated by annual gatherings of millions of dolphins.

As Frank Joseph shows, if we can learn to fully communicate with dolphins, accessing their millennia-old oral tradition, we may learn the truth about humanity's origins and our shared future, when humankind may yet again quit the land for a final return to the sea.

» Have you read this book? We'd like to know what you think about it - write a review about Our Dolphin Ancestors book by Frank Joseph and you'll earn 50c in Boomerang Bucks loyalty dollars (you must be a Boomerang Books Account Holder - it's free to sign up and there are great benefits!)

Frank Joseph was the editor in chief of Ancient American magazine from 1993 until 2007. He is the author of several books, including Before Atlantis and Advanced Civilizations of Prehistoric America. He lives in the Upper Mississippi Valley.