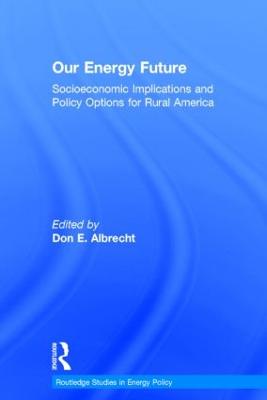 Yet, severe concerns persist and policy decisions on energy issues will have profound implications for all Americans and rural communities where consequences are experienced most directly. Thus, the time is appropriate for a careful exploration of the socioeconomic implications of our energy future.

The purpose of this book is to present timely and scientifically sound information on energy policy, socioeconomic aspects of energy production and consumption with a focus on rural areas. The book presents the latest research by top scholars with the goal of clarifying options and providing the basis for informed policy decisions.

Other Editions - Our Energy Future by Don E. Albrecht » Have you read this book? We'd like to know what you think about it - write a review about Our Energy Future book by Don E. Albrecht and you'll earn 50c in Boomerang Bucks loyalty dollars (you must be a Boomerang Books Account Holder - it's free to sign up and there are great benefits!)

Don Albrecht, PhD, is Director of the Western Rural Development Center and Associate Director of the National Agricultural and Rural Development Policy Center (NARDeP). Dr Albrecht has extensive research experience and numerous publications on issues confronting rural America. He has worked closely with policy makers and other leaders on approaches to address these issues. Susan Christopherson is a Professor and Chair of the Department of City and Regional Planning at Cornell University. An economic geographer committed to the integration of scholarly work and public engagement, her diverse research interests center on industry location decisions and regional, state, national and international economic development policy. Harry de Gorter is professor in the Dyson School of Applied Department of Applied Economics and Management, Cornell University. His research focus is on agricultural trade policy with recent work on biofuels and agricultural trade reform and the Doha Development Agenda, especially the impact of subsidies and protection on developing countries. Dusan Drabik is an Assistant Professor of agricultural economics at Wageningen University in The Netherlands, and a Research Fellow at LICOS, KU Leuven, Belgium. Dusan's research focus is on the analysis of agricultural and environmental policies, especially on biofuel policies in the United States, the European Union, and developing countries. Richard Krannich is Professor of Sociology at Utah State University. He has served as President of the Rural Sociological Society, and Executive Director of the International Association for Society and Natural Resources. His research examines social implications of environmental change and resource use in rural communities of the Intermountain West. Peter Robertson is a doctoral student in the Department of Environment and Society at Utah State University. His research investigates the social effects of renewable energy development in the American West. He is also interested in understanding the political, economic, and social barriers to future implementation of renewable energy systems. Shawn Olson is a doctoral student in Sociology at Utah State University. Her research investigates community perceptions of and social conflicts over the siting of industrial-scale renewable energy facilities in the rural American West. She is also interested in political economic dimensions of renewable energy development nationwide. Bruce A. McCarl - Regents Professor and Distinguished Professor of Agricultural Economics, Department of Agricultural Economics, Texas A&M University, College Station, TX 77843-2124, US, email: mccarl@tamu.edu Marta Wlodarz - Post-Doctoral Researcher at Center for Energy Policy and Economics, Department of Management, Technology and Economics, ETH Zurich, 8032 Zurich, Switzerland, email: wlodarzm@ethz.ch Matteo Muratori received his Doctor of Philosophy and Master of Science Degrees in Mechanical Engineering from The Ohio State University in 2014 and 2013, respectively. He also received a Master of Science Degree, Summa Cum Laude, and a Bachelor of Science Degree in Energy Engineering from Politecnico di Milano (Italy) in 2010 and 2007, respectively. Dr. Muratori is currently a Research Associate Engineer at The Ohio State University. Amanda Weinstein is an Assistant Professor at the University of Akron in the department of Economics. She is a member of the Council of Regional Economic Policy Advisors for The Fund for Our Economic Future and a Faculty Associate of the Regional Innovation Institute at the University of Akron. Mark Partridge is the Swank Chair of Rural-Urban Policy at The Ohio State University and a Professor in the AEDE Department. He has affiliations with the University of Alberta, University of Toronto, and University of Saskatchewan. He has published over 100 scholarly papers and his work. Dr. Beth-Anne Schuelke-Leech is an Assistant Professor in the John Glenn School of Public Affairs at Ohio State University in Columbus, Ohio. Her research focuses on the connections between engineering, business, innovation, and public policy. In addition to her scholarship, she worked as a professional engineer for over a decade.

A Preview for this title is currently not available.
More Books By Don E. Albrecht
View All