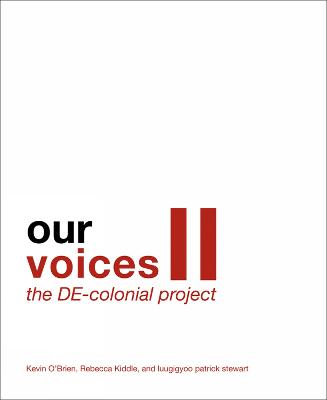 Our Voices II: The DE-colonial Project

Description - Our Voices II: The DE-colonial Project by Kevin O'Brien

Our Voices II: The DE-colonial Project will showcase decolonising projects which work to de-stable and disquiet colonial built environments. The land, towns, and cities on which we live have always been Indigenous places yet, for the most part our Indigenous value sets and identities have been disregarded or appropriated. Indigenous people continue to be gentrified out of the places to which they belong and neo-liberal systems work to continuously subjugate Indigenous involvement in decision-making processes in subtle, but potent ways. However, we are not, and have never been cultural dopes. Rather, we have, and continue to subvert the colonial value sets that overlay our places in important ways. AUTHORS: Kevin O'Brien is a decendent of the Kaurereg and Meriam people of the Torres Strait in Far North Queensland. He has a B.Arch and M.Phil from the University of Queensland and is Professor of Creative Practice at the University of Sydney. He is a practising architect and has completed a number of projects with Aboriginal communities throughout Australia. Dr Rebecca Kiddle is Ngati Porou and Nga Puhi. She has a PhD and MA in Urban Design from Oxford Brookes University and is a Lecturer in Environmental Studies at Victoria University of Wellington, NZ and is co-chair (Poneke) of Nga Aho, Network of Maori Design Professionals. Dr. Patrick Reid Stewart's Nisga'a name is Luugigyoo. He has a PhD from the University of British Columbia and a MArch from McGill University and is an Adjunct Professor at the McEwen School of Architecture at Laurentian University. He is Chair of the Indigenous Task Force of the RAIC and a practising architect working mainly with First Nations communities and Aboriginal organisations throughout British Columbia. SELLING POINTS: The second international (including Australia, Canada, USA and New Zealand) architecture and design book written by an entirely indigenous authorship A book of entirely indigenous voices on decolonising architecture and the city 220 colour images

» Have you read this book? We'd like to know what you think about it - write a review about Our Voices II: The DE-colonial Project book by Kevin O'Brien and you'll earn 50c in Boomerang Bucks loyalty dollars (you must be a Boomerang Books Account Holder - it's free to sign up and there are great benefits!)


A Preview for this title is currently not available.
More Books By Kevin O'Brien
View All