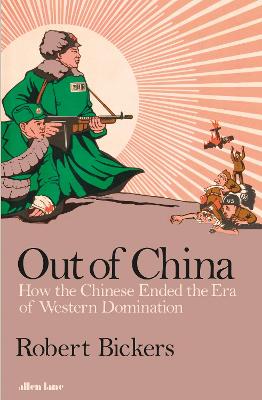 How the Chinese Ended the Era of Western Domination

Description - Out of China by Robert Bickers

Even at the high noon of Europe's empire-building China managed to be one of the handful of countries not to succumb. Invaded, humiliated and looted, China nonetheless kept its sovereignty. Robert Bickers' major new book is the first to describe fully what has proved to be one of the modern era's most important stories- the long, often agonizing process by which the Chinese had by the end of the twentieth century regained control of their own country.

Out of China uses a brilliant array of unusual, strange and vivid sources to recreate a now fantastically remote world- the corrupt, lurid modernity of pre-war Shanghai, the often tiny patches of 'extra-territorial' land controlled by European powers (one of which, unnoticed, had mostly toppled into a river), the entrep ts of Hong Kong and Macao, and the myriad means, through armed threats, technology and legal chicanery, by which China was kept subservient until, gradually, it emerged from Western control.

Today Chinese nationalism stays firmly rooted in memories of its degraded past - the quest for self-sufficiency, the determination to assert China's standing in the world, to stake its outstanding territorial claims, and never to be vulnerable to renewed attack. History matters deeply to Beijing's current rulers - and Out of China explains why.

Praise for The Scramble for China

Other Editions - Out of China by Robert Bickers Book Reviews - Out of China by Robert Bickers

» Have you read this book? We'd like to know what you think about it - write a review about Out of China book by Robert Bickers and you'll earn 50c in Boomerang Bucks loyalty dollars (you must be a Boomerang Books Account Holder - it's free to sign up and there are great benefits!)

Robert Bickers is the author of the highly-acclaimed Empire Made Me and The Scramble for China. He has written extensively on Chinese history and is a Professor of History at the University of Bristol.

A Preview for this title is currently not available.
More Books By Robert Bickers
View All

Getting Stuck In For Shanghai: Putting The Kibosh On The Kaiser From Thebund: The British At Shanghai And The Great War:
$8.49 $9.99