Description - Out Of Order by Sandra Day O'Connor

"NEW YORK TIMES BESTSELLER I called this book Out of Order because it reflects my goal, which is to share a different side of the Supreme Court. Most people know the Court only as it exists between bangs of the gavel, when the Court comes to order to hear arguments or give opinions. But the stories of the Court and the Justices that come from the out of order' moments add to the richness of the Court as both a branch of our government and a human institution. Justice Sandra Day O'Connor b> rom Justice Sandra Day O'Connor, the first woman to sit on the United States Supreme Court, comes this fascinating book about the history and evolution of the highest court in the land. i>Out of Order sheds light on the centuries of change and upheaval that transformed the Supreme Court from its uncertain beginnings into the remarkable institution that thrives and endures today. From the early days of circuit-riding, when justices who also served as trial judges traveled thousands of miles per year on horseback to hear cases, to the changes in civil rights ushered in by Earl Warren and Thurgood Marshall; from foundational decisions such as Marbury vs. Mad

Other Editions - Out Of Order by Sandra Day O'Connor 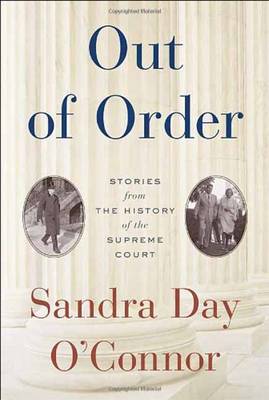 Book Reviews - Out Of Order by Sandra Day O'Connor

» Have you read this book? We'd like to know what you think about it - write a review about Out Of Order book by Sandra Day O'Connor and you'll earn 50c in Boomerang Bucks loyalty dollars (you must be a Boomerang Books Account Holder - it's free to sign up and there are great benefits!)

Sandra Day O'Connor was born in El Paso, Texas, and raised on the Lazy B Ranch. She attended Stanford University, where she took Wallace Stegner's writing course. She began her public service in Phoenix, and was majority leader of the Arizona Senate before becoming a judge. She is the author of Lazy B, a memoir about growing up in the Southwest, and The Majesty of the Law, a reflection on American law and life. President Reagan nominated her as Associate Justice of the Supreme Court of the United States, and she served from 1981 to 2006. She serves as Chancellor of the College of William & Mary, and is on the board of trustees of the National Constitution Center in Philadelphia.

A Preview for this title is currently not available.
More Books By Sandra Day O'Connor
View All