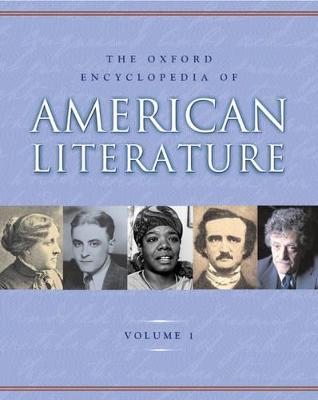 The Oxford Encyclopedia of American Literature

Description - The Oxford Encyclopedia of American Literature by Jay Parini

The Oxford Encyclopedia of American Literature gathers together 350 essays from more than 190 leading scholars on the whole of American literature, from European discovery to the present. At the core of the Encyclopedia lie essays on poets, playwrights, essayists, and novelists. Figures such as Whitman, Melville, Faulkner, Frost, and Morrison are discussed in detail with each examined in the context of his or her times, an assessment of the
writer's current reputation, a bibliography of major works, and a list of major critical and biographical works about the writer. Entries on major works place them in their historical context and offer a range of possibilities with regard to critical approach. The Encyclopedia also contains essays on literary movements,
periods, and themes, pulling together a broad range of information and making connections between them. Each entry has its own primary and annotated secondary bibliography, and a system of cross-references helps readers locate information with ease. It is an outstanding reference source for students and scholars, libraries, and readers interested in American literature.

» Have you read this book? We'd like to know what you think about it - write a review about Oxford Encyclopedia of American Literature book by Jay Parini and you'll earn 50c in Boomerang Bucks loyalty dollars (you must be a Boomerang Books Account Holder - it's free to sign up and there are great benefits!)

A Preview for this title is currently not available.
More Books By Jay Parini
View All