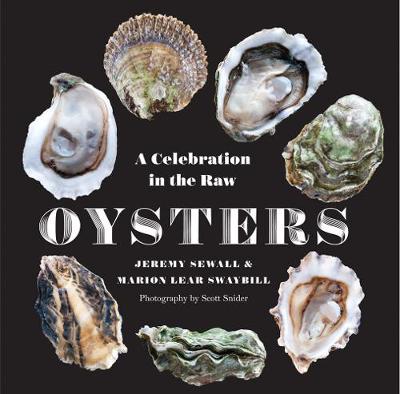 A Celebration in the Raw

For centuries, oysters have had the power to delight and sustain, inspiring writers and artists, lowly cooks and four-star chefs, and everyone in between. Oysters brings readers the first wide-ranging visual exploration of this humble shellfish, incorporating original photography from one of New England's most celebrated oyster farms, portrait-style shots of a cross-section of North American oysters, and celebrated portrayals of oysters in the arts, alongside a lively and informative text. An introduction by award- winning chef Jeremy Sewall, drawing on his New England lineage and his position in the new wave of oyster pioneers, frames this survey. Divided into four parts, Oysters is an introduction for the novice and a celebration for the aficionado. Part One is a primer on the who, what, when, and where of oyster farming, tasting, and shucking, with illustrative maps and step-by-step photographs. In Part Two, readers encounter in-depth profiles of oystermen, including fourth-generation New Englanders, aquaculture pioneers, and resilient farmers along the Louisiana coast. Part Three offers an unparalleled look at more than fifty varieties of North American oyster from New England, the Pacific Northwest, California, the Gulf Coast, the Chesapeake Bay, and Canada with exquisite photography of the interior and exterior of each type, accompanied by flavor profiles and merroir. The book concludes with a brief and engaging history of oysters, a look at the myths that surround the shellfish, and iconic imagery that celebrate the beauty of oysters. The only book of its kind, 'Oysters' is the definitive visual companion to this iconic food. Overflowing with original photography and charming anecdotes, it will serve as the perfect companion for foodies, amateur chefs, and lovers of art, history, and the sea. AUTHOR: Jeremy Sewall is a James Beard Award nominated chef and restaurateur based in Boston. Marion Lear Swaybill is an Emmy award winning television producer and writer. Scott Snider is an accomplished natural history filmmaker who has contributed to National Geographic, the Discovery Channel, and the National Park Service, among many others. He founded the photography and film studio Half Moon Productions in 2001. Over 150 colour photos

» Have you read this book? We'd like to know what you think about it - write a review about Oysters book by Jeremy Sewall and you'll earn 50c in Boomerang Bucks loyalty dollars (you must be a Boomerang Books Account Holder - it's free to sign up and there are great benefits!)

Marion Lear Swaybill is an Emmy award-winning television producer, writer, and pioneering media executive. As Director of Program Acquisitions at PBS station WNET, (1981-1989), Swaybill was on the cutting edge of the food-on-television revolution, introducing New York public television audiences to luminary chefs including Madhur Jaffrey, Lidia Bastianach, Martin Yan, Jacques Pepin, Britain's memorable "Two Fat Ladies" and many others. A cook as well as a writer, her recipes have appeared in the "Great Cooks Guide" series (Random House) and New England's "Sound Magazine." Jeremy Sewall is an award-winning chef and restaurateur based in Boston and two-time James Beard Award nominee. Trained at the Culinary Institute of America, he has cooked in kitchens around the globe, focusing on seasonal ingredients and his New England food heritage. His restaurants Lineage, Eastern Standard, Island Creek Oyster Bar, and Row 34 have received accolades from New York Times, Esquire, Gourmet and The Boston Globe, among others. Scott Snider is an award-winning natural history filmmaker whose work takes him around the world as an accomplished underwater, long lens, and macro cinematographer. Scott has over 45 major credits for National Geographic, PBS Nature, Discovery Channel, Animal Planet, the National Park Service and others. He is the founder of Half Moon Productions, a film and photography studio based in Charleston, South Carolina.

A Preview for this title is currently not available.
More Books By Jeremy Sewall
View All