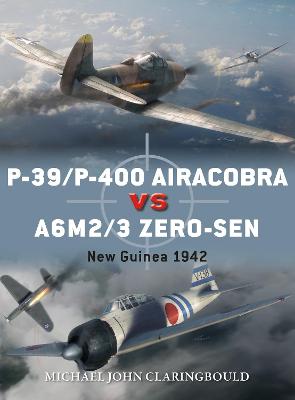 After the huge advances made in the early months of the Pacific war, it was in remote New Guinea where the advance of Imperial Japanese Naval Air Force (IJNAF) A6M Zero-sen fighters was first halted due to a series of offensive and defensive aerial battles ranging from treetop height up to 30,000 ft.

Initially, the IJNAF fought Australian Kittyhawks, but by May 1942 they had fought themselves into oblivion, and were relieved by USAAF P-39 and P-400 Airacobras. The battles unfolded over mountainous terrain with treacherous tropical weather. Neither IJNAF or USAAF pilots had been trained for such extreme conditions, incurring many additional losses aside from those that fell in combat. Using specially commissioned artwork and contemporary photographs and testimony, this fascinating study explains how, despite their initial deficit in experience and equipment, the Airacobras managed to square the ledger and defend New Guinea.

» Have you read this book? We'd like to know what you think about it - write a review about P-39/P-400 Airacobra vs A6M2/3 Zero-sen book by Jim Laurier and you'll earn 50c in Boomerang Bucks loyalty dollars (you must be a Boomerang Books Account Holder - it's free to sign up and there are great benefits!)

Michael John Claringbould was raised in Papua New Guinea, where he developed his fascination for the Pacific air war. During a career in the Australian foreign service he undertook postings across Oceania and the Pacific. He is author of three books on the USAAF Fifth Air Force: The Forgotten Fifth, Forty of the Fifth and Black Sunday, and co-author of Eagles of the Southern Sky, a history of the Tainan Kaigun Kokutai in New Guinea, and The Roarin 20s, a unit history of the USAAF 312th Bombardment Group. Michael is also an associate editor of the historical aviation magazine Flightpath, to which he has been contributing articles for 18 years. He lives in Kambah, ACT, Australia. Jim Laurier is a native of New England, growing up in New Hampshire and Massachusetts. He has been drawing since he could hold a pencil and throughout his life he has worked in many mediums creating artwork on a variety of subjects. He has worked on the Osprey Aviation list since 2000, and in that time he has produced some of the finest artwork seen in these volumes. He lives in New Hampshire, USA Gareth Hector is a digital artist of international standing as well as an aviation history enthusiast. Gareth completed the battlescene artwork and cover artwork. He lives in Perthshire, UK.