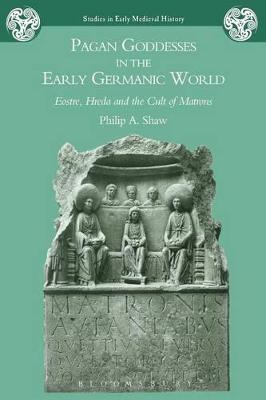 Eostre, Hreda and the Cult of Matrons

Description - Pagan Goddesses in the Early Germanic World by Philip A. Shaw

This book considers evidence for Germanic goddesses in England and on the Continent, and argues that modern scholarship has tended to focus too heavily on the notion of divine functions or spheres of activity, such as fertility or warfare, rather than considering the extent to which goddesses are rooted in localities and social structures - such local religious manifestations are more important to Germanic paganisms than is often supposed, and should caution us against assumptions of pan-Germanic traditional beliefs.

Linguistic and onomastic evidence is not always well integrated into discussions of historical developments in the early Middle Ages, and this book provides both an introduction to the models and methods employed throughout, and a model for further research into the linguistic evidence for traditional beliefs among the Germanic-speaking communities of early medieval Europe.

Book Reviews - Pagan Goddesses in the Early Germanic World by Philip A. Shaw

» Have you read this book? We'd like to know what you think about it - write a review about Pagan Goddesses in the Early Germanic World book by Philip A. Shaw and you'll earn 50c in Boomerang Bucks loyalty dollars (you must be a Boomerang Books Account Holder - it's free to sign up and there are great benefits!)

Philip A. Shaw is Lecturer in English Language and Old English, University of Leicester.

A Preview for this title is currently not available.
More Books By Philip A. Shaw
View All