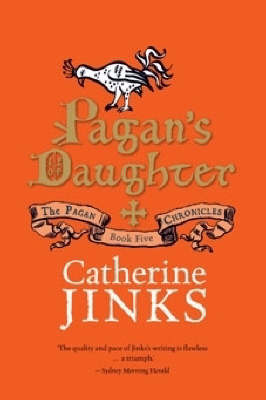 Book Five in the Pagan Chronicles

'We've forbidden her to speak. We've stuffed her mouth with tow. We've shaved off her hair, once or twice. We've even locked her in that chest over there. And she remains incorrigible. She's eaten up with sin, Holy Father, I don't know what to do with her any more.'

At sixteen, Babylonne is desperate. She's been starved and beaten, she's endured six bloody sieges, and now her aunt wants her to marry a crazy old man who thinks he's a giant olive.

Can she trust the mysterious priest who's been spying on her, claiming to be a friend of her father's? Or would it be better to fight - and perhaps die - in the long, vicious war with the French?

Catherine Jinks's award-winning Pagan series are international bestsellers. Now her action-packed epic continues with Book Five of the Pagan Chronicles - Pagan's daughter, Babylonne, is as feisty, funny and irresistible as her famous father.

» Have you read this book? We'd like to know what you think about it - write a review about Pagan'S Daughter book by Catherine Jinks and you'll earn 50c in Boomerang Bucks loyalty dollars (you must be a Boomerang Books Account Holder - it's free to sign up and there are great benefits!)

CATHERINE JINKS is a scholar of medieval history and a prolific author for teenagers, children and adults. Her books have been published to wide acclaim in Australia and overseas and have won numerous awards. She loves reading, history, films, TV and gossip, and says she could write for eight hours straight every day if she had the chance. Catherine lives in the Blue Mountains of NSW with her husband and daughter.