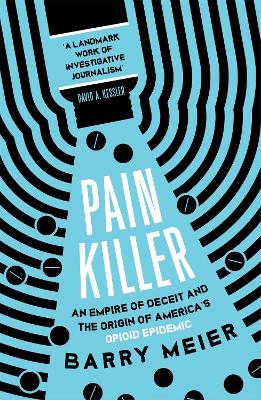 Pain Killer: An Empire of Deceit and the Origins of America's Opioid Epidemic

Description - Pain Killer: An Empire of Deceit and the Origins of America's Opioid Epidemic by Barry Meier

Every catastrophe has a beginning. For the opioid crisis in America, the seed was a drug called OxyContin. First hailed as a miracle drug for severe pain in the early 1990s, OxyContin went on to ignite a plague of addiction and death across America, fuelled by the aggressive marketing of its maker, Purdue Pharma and the billionaire Sackler brothers who owned the company. Investigative journalist Barry Meier was the first to write about the elusive Sackler family, their role in this catastrophic epidemic and the army of local doctors, law enforcement and worried parents that tried to bring them down. We meet the teenager proud of being the youngest Oxy user she knows at just 16, the local doctor who witnesses his community in the grip of a ferocious epidemic, the three billionaire Sackler brothers, and the government official who made it her mission to hold the company to account. Equal parts crime thriller, medical detective story, and business expose, Pain Killer is the origin story of the opioid crisis and a hard-hitting look at how a supposed wonder drug became the trigger for a national tragedy.

Book Reviews - Pain Killer: An Empire of Deceit and the Origins of America's Opioid Epidemic by Barry Meier

» Have you read this book? We'd like to know what you think about it - write a review about Pain Killer: An Empire of Deceit and the Origins of America's Opioid Epidemic book by Barry Meier and you'll earn 50c in Boomerang Bucks loyalty dollars (you must be a Boomerang Books Account Holder - it's free to sign up and there are great benefits!)


A Preview for this title is currently not available.
More Books By Barry Meier
View All