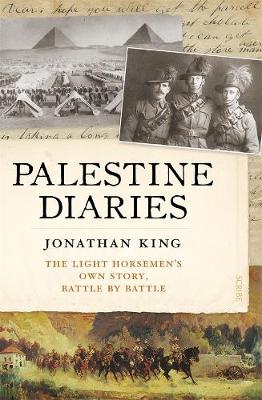 Palestine Diaries: The Light Horsemen's Own Story, Battle by Battle

Culminating with the cavalry charge at Beersheba on 31 October 1917, Palestine Diaries is the story of Australia?s Light Horsemen of WWI, told in their own brutally honest words - day by day, battle after bloody battle.One hundred years after that now-legendary battle - widely considered the last great cavalry charge - Dr. Jonathan King argues that the breathtaking achievement of the 4th Light Horse Brigade should become the cornerstone of our national identity.The soldiers in these pages were the first to achieve incredible victories for their new nation - ahead of the Western Front, and unlike the defeats of Gallipoli. These young Australians helped demolish the centuries-old Ottoman Empire by driving the Turks from the strategic Suez Canal across the Sinai, and up through Palestine, Jordan, and Syria to be first into the enemy stronghold of Damascus - a victory that would not only change the course of the war, but would also plant the seeds of the modern Middle Eastern conflicts.Published together here, many for the first time, are the diaries, letters, and photos of those brave young men, whose service and sacrifice helped shape a nation.

» Have you read this book? We'd like to know what you think about it - write a review about Palestine Diaries: The Light Horsemen's Own Story, Battle by Battle book by Jonathan King and you'll earn 50c in Boomerang Bucks loyalty dollars (you must be a Boomerang Books Account Holder - it's free to sign up and there are great benefits!)

Award-winning historian Dr Jonathan King has been producing books and films about World War I since 1994. He leads battlefield tours to Gallipoli and the Western Front, and is a regular television and radio commentator, as well as a writer for newspapers. After lecturing at The University of Melbourne for many years, he has written more than 30 books and produced 20 documentaries. He is based in Sydney with his fellow adventurer and wife, Jane. They have four daughters and seven grandchildren.