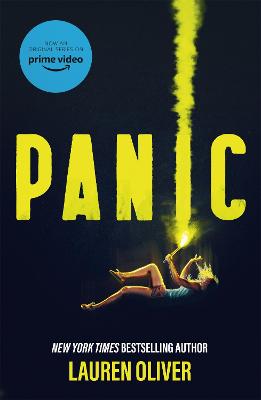 Soon to be a major Amazon Prime Video series.An utterly gripping thriller from bestselling author Lauren Oliver. Panic began as so many things do in Carp, a poor town of twelve thousand people in the middle of nowhere: because it was summer, and there was nothing else to do.Heather never thought she would compete in panic, a legendary game played by graduating seniors, where the stakes are high and the payoff is even higher. She'd never thought of herself as fearless, the kind of person who would fight to stand out. But when she finds something, and someone, to fight for, she will discover that she is braver than she ever thought.Dodge has never been afraid of panic. His secret will fuel him, and get him all the way through the game; he's sure of it. But what he doesn't know is that he's not the only one with a secret. Everyone has something to play for.For Heather and Dodge, the game will bring new alliances, unexpected revelations, and the possibility of first love for each of them-and the knowledge that sometimes the very things we fear are those we need the most.In this gritty, spellbinding novel, bestselling author Lauren Oliver delivers a gripping narrative of friendship, courage, survival, and hope. » Have you read this book? We'd like to know what you think about it - write a review about Panic: A major Amazon Prime TV series book by Lauren Oliver and you'll earn 50c in Boomerang Bucks loyalty dollars (you must be a Boomerang Books Account Holder - it's free to sign up and there are great benefits!)


A Preview for this title is currently not available.
More Books By Lauren Oliver
View All

Broken Things: From the bestselling author of Panic, soon to be a major Amazon Prime series
$15.11 $17.99