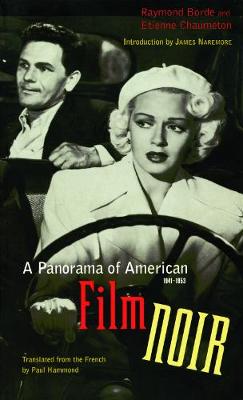 When it appeared in France in 1955, A Panorama of American Film Noir was the first book ever on the genre: this clairvoyant study of Hollywood film noir is at last available in English translation.

Beginning with the first film noir, The Maltese Falcon, and continuing through the post war "glory days," which included such films as Gilda, The Big Sheep, Dark Passage, and The Lady from Shanghai, Borde and Chaumeton examine the dark sides of American society, film, and literature that made film noir possible, even necessary.

A Panorama of American Film Noir includes a film noir chronology, a voluminous filmography, a comprehensive index, and a selection of black-and-white production stills.

"Incredibly, this is the first English translation of the very influential 1955 French book that initially identified, described and assessed the Hollywood movies that we now term film noir . . . a seminal work of cinema description and analysis and therefore an essential purchase for most libraries." From the Starred Review in Library Journal

Raymond Borde (1920 - 2004), founder of the Cinematheque de Toulouse, wrote extensively on film history.; among his short films is a study of the artist Pierre Molinier.

Etienne Chaumeton was the film critic of the Toulouse newspaper La Depeche until his death.

» Have you read this book? We'd like to know what you think about it - write a review about Panorama of American Film Noir (1941-1953) book by Raymond Borde and you'll earn 50c in Boomerang Bucks loyalty dollars (you must be a Boomerang Books Account Holder - it's free to sign up and there are great benefits!)