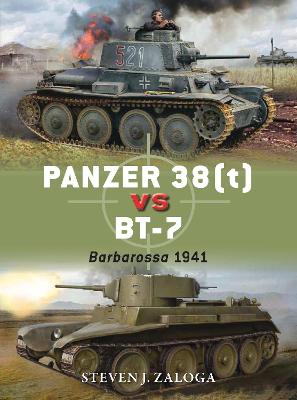 The tank battles in the Soviet Union during the summer of 1941 were the largest in World War II, exceeding even the more famous Prokhorovka encounter during the Kursk campaign. Indeed, they were the largest tank battles ever fought.
This book examines two evenly matched competitors in this conflict, the German Panzer 38(t) and the Soviet BT-7. Both were of similar size, armed with guns of comparable firepower, and had foreign roots - the Panzer 38(t) was a Czechoslovak design and the BT-7 was an evolution of the American Christie tank. With full-colour artwork and archive and present-day photography, this absorbing study assesses the strengths and limitations of these two types against the wider background of armoured doctrine in the opening stages of Operation Barbarossa.

» Have you read this book? We'd like to know what you think about it - write a review about Panzer 38t vs BT-7 book by Steven J. Zaloga and you'll earn 50c in Boomerang Bucks loyalty dollars (you must be a Boomerang Books Account Holder - it's free to sign up and there are great benefits!)

Steven J. Zaloga received his BA in History from Union College and his MA from Columbia University. He has worked as an analyst in the aerospace industry for over two decades, covering missile systems and the international arms trade, and has served with the Institute for Defense Analyses, a federal think tank. He is the author of numerous books on military technology and military history, with an accent on the US Army in World War II as well as Russia and the former Soviet Union. Jim Laurier is a native of New England and lives in New Hampshire. He has been commissioned to paint for the US Air Force and has aviation paintings on permanent display at the Pentagon.