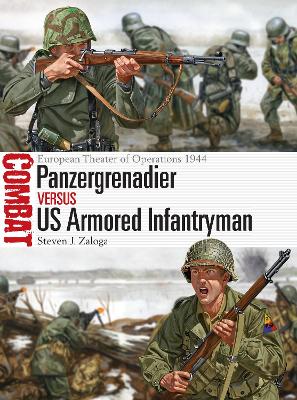 Panzergrenadier vs US Armored Infantryman

Description - Panzergrenadier vs US Armored Infantryman by Steven J. Zaloga

During World War II, the two pre-eminent mechanized infantry forces of the conflict, the German Panzergrenadier arm and the US Army's armoured infantrymen, clashed in France and Belgium after the Normandy landings. These engagements went on to profoundly influence the use of mechanized infantry in the post-war world. Drawing upon a variety of sources, this book focuses on three key encounters between July and December 1944 including during Operation Cobra and the Battle of the Bulge, and examines the origins, equipment, doctrine and combat record of both forces.

With specially commissioned full-colour artwork and maps, this study sheds light on the evolving nature of mechanized warfare at the height of World War II.

» Have you read this book? We'd like to know what you think about it - write a review about Panzergrenadier vs US Armored Infantryman book by Steven J. Zaloga and you'll earn 50c in Boomerang Bucks loyalty dollars (you must be a Boomerang Books Account Holder - it's free to sign up and there are great benefits!)

Steven J. Zaloga received his BA in History from Union College and his MA from Columbia University. He has worked as an analyst in the aerospace industry for over two decades, covering missile systems and the international arms trade, and has served with the Institute for Defense Analyses, a federal think tank. He is the author of numerous books on military technology and military history, with an accent on the US Army in World War II as well as Russia and the former Soviet Union. Johnny Shumate works as a freelance illustrator living in Nashville, Tennessee. He began his career in 1987 after graduating from Austin Peay State University. Most of his work is rendered in Adobe Photoshop using a Cintiq monitor. His greatest influences are Angus McBride, Don Troiani and Edouard Detaille.