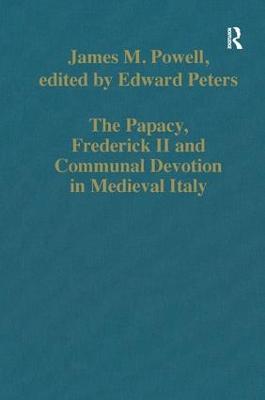 The Papacy, Frederick II and Communal Devotion in Medieval Italy

Of the twenty-five essays in this volume, most were published between 1961 and 2013, but four are printed here for the first time. They represent the work of a great and original scholar in Mediterranean history whose unflagging interest in Frederick II and his world consistently led him out into broader fields, which he always viewed in original ways. In an age often called that of papal monarchy and secular-minded rulers, Powell found popes with complex agendas and extensive pastoral concerns, a rather more Christian Frederick II, the human personnel and mechanics of the Fifth Crusade, the sermons of the devout urban layman Albertanus of Brescia, and Muslims under Christian rule. His studies here assert a continuity between the pontificates of Innocent III and Honorius III as well as the pragmatic necessity that only secular rulers could launch and direct crusading expeditions. His interest in the northern Italian communes relates their devotional culture to the ideals of virtuous government and communal identity. The devotional culture of the communes was to be the subject of his next book, now unfinished; several parts of it could be rescued and are now included here.

» Have you read this book? We'd like to know what you think about it - write a review about Papacy, Frederick II and Communal Devotion in Medieval Italy book by James M. Powell and you'll earn 50c in Boomerang Bucks loyalty dollars (you must be a Boomerang Books Account Holder - it's free to sign up and there are great benefits!)

James M. Powell (1930 - 2011) was Professor of History Emeritus at Syracuse University, USA. A previous collection of his articles appeared in the Variorum series in 2007: The Crusades, The Kingdom of Sicily, and the Mediterranean.

A Preview for this title is currently not available.
More Books By James M. Powell
View All