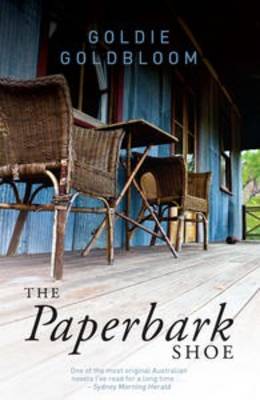 Gin, the albino, marries to escape the confines of an asylum. Toad, a little man who wears corsets, marries to prove his manhood. Together they are freaks - feared and ridiculed by the remote farming community in which they live. Into their lives come two Italian POWs bringing music, sensuality and a love that will fan the flames of small town bigotry. 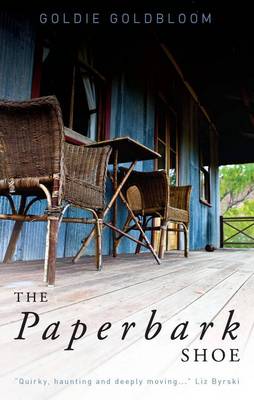 » Have you read this book? We'd like to know what you think about it - write a review about Paperbark Shoe book by Goldie Goldbloom and you'll earn 50c in Boomerang Bucks loyalty dollars (you must be a Boomerang Books Account Holder - it's free to sign up and there are great benefits!)

“The tin roof of the Italian’s hut flashed like a semaphore at the clouds scudding over the moon, smoky white clouds, fraying at the edges, with deep purple bellies”

The Paperbark Shoe is the first novel by West Australian-born novelist and short story writer, Goldie Goldbloom. It won the Association of Writers and Writing Programs Award for Fiction in 2008, and the Literary Novel of the Year from the ForeWord Magazine (Independent Publishers) in 2011. In 1943, Italian Prisoners of War were sent out to work on West Australian farms, a welcome source of labour at a time when able-bodied men were away at war. Antonio and Gianpaolo arrive at Mr Toad’s farm on the Cemetery Road, five miles west of Wyalkatchem, dressed in their maroon-dyed uniforms.

This remote holding (“On one side of us stands the uninhabited coast, thousands of rocky miles patrolled by sharks, and on the other stands the vast, appalling desert of the great red centre, studded with the bones of animals and men that have strayed there and melted into the earth”) is home to Gin Toad, albino, prize-winning pianist, mother of three and two months pregnant; and Toadie, known for his collection of women’s corsets. Both misfits in society, together for reasons that never included love.

When Antonio flatters Gin with attention and compliments, her attention is drawn to Toadie’s shortcomings: “I can hear him now, his voice so like the croaking of a frog in a bucket, his deep sniffs punctuating each sentence”. The nature of their marriage irritates her more than ever: “He never touched me in the daytime, in the light, that man who ran his hands so tenderly over the horses, who touched his nose to their velvet muzzles and murmured to them as he gazed into their eyes. He had it in him, a capacity for love. But he hid it from me” Goldbloom’s plot goes where expected, but with a twist. Her characters are a breed apart: many are quirky, all are in some way flawed, and while this can be endearing, the only truly appealing character in this tale is young Alfie. All the rest are selfish, some to an appalling degree. Her descriptive prose is beautiful and she certainly captures the feel of the West Australian desert and the small town attitudes of the 1940s. An outstanding debut.