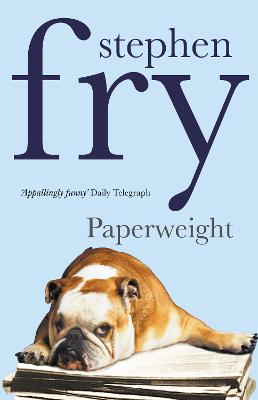 A delightful compendium of writings that perfectly express the wit and wisdom of Stephen Fry.

A hilarious collection of the many articles written by Stephen Fry for magazines, newspapers and radio. It includes selected wireless essays of Donald Trefusis, the ageing professor of philology brought to life in Fry's novel The Liar, and the best of Fry's weekly column for the Daily Telegraph.

Perfect to dip into but just as enjoyable to read cover to cover, this book, perhaps more than any other, shows the breadth of Fry's interests and the depth of his insight. He remains a hilarious writer on whatever topic he puts his mind to.

» Have you read this book? We'd like to know what you think about it - write a review about Paperweight book by Stephen Fry and you'll earn 50c in Boomerang Bucks loyalty dollars (you must be a Boomerang Books Account Holder - it's free to sign up and there are great benefits!)