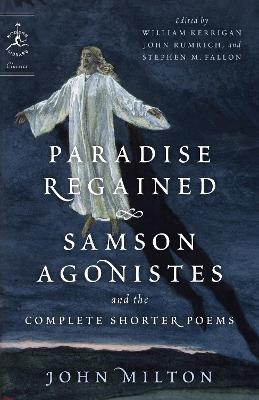 "Derived from the Modern Library's esteemed The Complete Poetry and Essential Prose of John Milton, this new volume, extensively revised and updated by its editors, contains Milton's two late masterpieces, the brief epic Paradise Regained and the tragic drama Samson Agonistes. Age after age, these works have inspired new controversy and exciting interpretive debates. With expert commentary to guide the reader through historical contexts and verbal details, as well as the larger political and philosophical implications, the concerns of these canonical pieces live once again for today's audiences. The volume also contains Milton's complete shorter poems, which include such major achievements as Lycidas, A Masque Presented at Ludlow Castle, 1634, L'Allegro, and Il Penseroso, and the author's twenty-four influential sonnets. Thoughtfully edited and carefully designed, this is an essential publication of Milton's classic poetry."

» Have you read this book? We'd like to know what you think about it - write a review about Paradise Regained, Samson Agonistes, And The Complete Shorter Poems book by John Milton and you'll earn 50c in Boomerang Bucks loyalty dollars (you must be a Boomerang Books Account Holder - it's free to sign up and there are great benefits!)

John Milton (1608-74), the great English poet, is best known for his epic masterpiece, Paradise Lost. In addition to writing brilliant verse, he was a master of polemical prose. Milton was a private tutor and, during the Interregnum, the Secretary for Foreign Tongues in Oliver Cromwell's government. William Kerrigan's previous books include The Sacred Complex- On the Psychogenesis of Paradise Lost, for which he won the James Holly Hanford Award of the Milton Society of America. A former president of the Milton Society, he has earned numerous distinctions from that group, including its award for lifetime achievement. He is professor emeritus at the University of Massachusetts. John Rumrich is the author of Matter of Glory- A New Preface to Paradise Lost and Milton Unbound- Controversy and Reinterpretation. An award-winning editor and writer, he is Thaman Professor of English at the University of Texas at Austin, where he teaches early modern British literature. Stephen M. Fallon is the author of Milton's Peculiar Grace- Self-Representation and Authority and Milton Among the Philosophers- Poetry and

John Milton's Last Thoughts on the Trinity: Extracted from His Posthumous Work Entitled a Treatise on Christian Doctrine Compiled from the Holy Scriptures Alone, Lately Published by Royal Command
$80.03 $88.92

Nova Solyma, the Ideal City: Or, Jerusalem Regained: An Anonymous Romance Written in the Time of Charles I., Now First Drawn from Obscurity, and Attributed to the Illustrious John Milton; Volume 2
$99.00 $110.00

Milton's Areopagitica: A Speech for the Liberty of Unlicensed Printing
$80.03 $88.92