The Paradox of American Unionism

Why Americans Like Unions More Than Canadians Do, But Join Much Less

Description - The Paradox of American Unionism by Seymour Martin Lipset

Why have Americans, who by a clear majority approve of unions, been joining them in smaller numbers than ever before? This book answers that question by comparing the American experience with that of Canada, where approval for unions is significantly lower than in the United States, but where since the mid-1960s workers have joined organized labor to a much greater extent. Given that the two countries are outwardly so similar, what explains this paradox? This book provides a detailed comparative analysis of both countries using, among other things, a detailed survey conducted in the United States and Canada by the Ipsos-Reid polling group.The authors explain that the relative reluctance of employees in the United States to join unions, compared with those in Canada, is rooted less in their attitudes toward unions than in the former country's deep-seated tradition of individualism and laissez-faire economic values. Canada has a more statist, social democratic tradition, which is in turn attributable to its Tory and European conservative lineage.
Canadian values are therefore more supportive of unionism, making unions more powerful and thus, paradoxically, lowering public approval of unions. Public approval is higher in the United States, where unions exert less of an influence over politics and the economy.

Other Editions - The Paradox of American Unionism by Seymour Martin Lipset 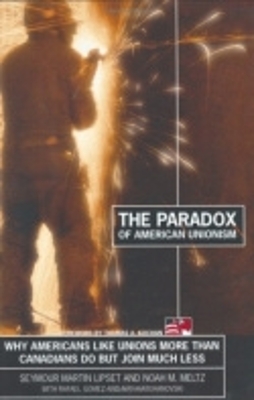 » Have you read this book? We'd like to know what you think about it - write a review about Paradox of American Unionism book by Seymour Martin Lipset and you'll earn 50c in Boomerang Bucks loyalty dollars (you must be a Boomerang Books Account Holder - it's free to sign up and there are great benefits!)

The late Seymour Martin Lipset was Senior Fellow at the Hoover Institution, Stanford University; Senior Scholar at the Woodrow Wilson International Center for Scholars; and Hazel Professor of Public Policy and Sociology Emeritus at George Mason University. His numerous books include American Exceptionalism and Continental Divide. The late Noah M. Meltz was Principal of Woodsworth College and Professor Emeritus at the University of Toronto. Rafael Gomez is Lecturer at the London School of Economics and Research Fellow at the University of Toronto's Centre for Industrial Relations. Ivan Katchanovski is Kluge Post-Doctoral Fellow at the John W. Kluge Center, Library of Congress. Thomas A. Kochan is the George Maverick Bunker Professor at the MIT Sloan School of Management and Co-Director of the MIT Institute for Work and Employment Research. He is coauthor of Healing Together, Up in the Air, The Transformation of American Industrial Relations, and, with Thomas A. Kochan and Alexander J. S. Colvin,Labor Relations in a Globalizing World, all from Cornell, and author or editor of many other books.

A Preview for this title is currently not available.
More Books By Seymour Martin Lipset
View All