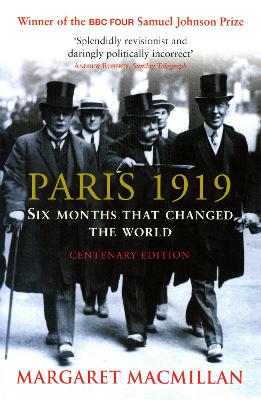 Between January and July 1919, after the war to end all wars, men and women from all over the world converged on Paris for the Peace Conference. At its heart were the leaders of the three great powers - Woodrow Wilson, Lloyd George and Clemenceau. Kings, prime ministers and foreign ministers with their crowds of advisers rubbed shoulders with journalists and lobbyists for a hundred causes - from Armenian independence to women's rights. Everyone had business in Paris that year - T.E. Lawrence, Queen Marie of Romania, Maynard Keynes, Ho Chi Minh. There had never been anything like it before, and there never has been since. For six extraordinary months the city was effectively the centre of world government as the peacemakers wound up bankrupt empires and created new countries. They pushed Russia to the sidelines, alienated China and dismissed the Arabs, struggled with the problems of Kosovo, of the Kurds, and of a homeland for the Jews. The peacemakers, so it has been said, failed dismally; failed above all to prevent another war. Margaret MacMillan argues that they have unfairly been made scapegoats for the mistakes of those who came later. They tried to be evenhanded, but their goals - to make defeated countries pay without destroying them, to satisfy impossible nationalist dreams, to prevent the spread of Bolshevism and to establish a world order based on democracy and reason - could not be achieved by diplomacy. This book offers a prismatic view of the moment when much of the modern world was first sketched out.

Other Editions - Paris 1919 by Margaret MacMillan 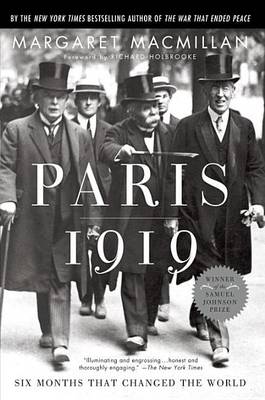 » Have you read this book? We'd like to know what you think about it - write a review about Paris 1919 book by Margaret MacMillan and you'll earn 50c in Boomerang Bucks loyalty dollars (you must be a Boomerang Books Account Holder - it's free to sign up and there are great benefits!)


A Preview for this title is currently not available.
More Books By Margaret MacMillan
View All