In 1939, fashion became an economic and symbolic sphere of great importance in France. Invasive textile legislation, rationing and threats from German and American couturiers were pushing the design and trade of Parisian style to its limits. It is widely accepted that French fashion was severely curtailed as a result, isolated from former foreign clients and deposed of its crown as global queen of fashion. This pioneering book offers a different story. Arguing that Paris retained its hold on the international haute couture industry right throughout WWII, eminent dress historians and curators come together to show that, amid political, economic and cultural traumas, Paris fashion remained very much alive under the Nazi occupation - and on an international level.

Bringing exciting perspectives to challenge a familiar story and introducing new overseas trade links out of occupied France, this book takes us from the salons of renowned couturiers such as Edward Molyneux and Robert Piguet, French Vogue and Le Jardin des Modes and luxury Lyon silk factories, to Rio de Janeiro, Denmark and Switzerland, and the great American department stores of New York. Also comparing extravagant Paris occupation styles to austerity fashions of the UK and USA, parallel industrial and design developments highlight the unresolvable tension between luxury fashion and the everyday realities of wartime life. Showing that Paris strove to maintain world dominance as leader of couture through fashion journalism, photography and exported fashion forecasting, Paris Fashion and World War Two makes a significant contribution to the cultural history of fashion. 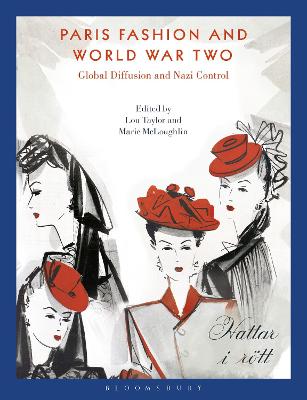 » Have you read this book? We'd like to know what you think about it - write a review about Paris Fashion and World War Two: Global Diffusion and Nazi Control book by Lou Taylor and you'll earn 50c in Boomerang Bucks loyalty dollars (you must be a Boomerang Books Account Holder - it's free to sign up and there are great benefits!)


A Preview for this title is currently not available.
More Books By Lou Taylor
View All

Paris Fashion and World War Two: Global Diffusion and Nazi Control
No Stock on Hand, Supplier Has No Due Date for Supply.
$153.00 $170.00