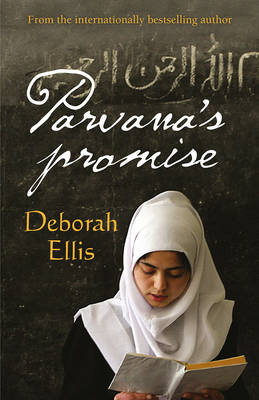 She could tell the woman was watching her through the small window in the door. The girl kept her back against the door and didn't move.

'We can keep you locked up here for a very long time,' the woman finally said, speaking softly. 'Talk to me. Is your name Parvana?'

The girl remained with her back against the door. Silent. She heard the woman's boots walk away down the hall. She stood and waited, listening hard to see if the boots would come back.

When she was sure she was alone, the girl in the dusty blue chador finally spoke. 'Yes,' she whispered. 'My name is Parvana.'

» Have you read this book? We'd like to know what you think about it - write a review about Parvana'S Promise book by Deborah Ellis and you'll earn 50c in Boomerang Bucks loyalty dollars (you must be a Boomerang Books Account Holder - it's free to sign up and there are great benefits!)

Deborah Ellis has achieved international acclaim with her courageous and dramatic books that give Western readers a glimpse into the plight of children in developing countries. She has won the Governor General's Award, Sweden's Peter Pan Prize, the Ruth Schwartz Award, the University of California's Middle East Book Award, the Jane Addams Children's Book Award and the Vicky Metcalf Award. A long-time feminist and anti-war activist, she is best known for the Parvana series, which has been published around the world in seventeen languages, with more than a million dollars in royalties donated to Street Kids International and to Women for Women, an organization that supports health and education projects in Afghanistan. In 2006, Deb was named to the Order of Ontario.