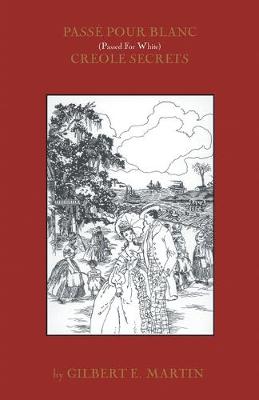 Passe Pour Blanc is a provocative, exciting, and tragic story. It vividly depicts the ongoing struggle and frustrations of a very unique nation - the French Creoles of Louisiana. Although this story and its characters are fictitious, they are based upon reality, and a lifetime of obsservations and experience. Also, through this most powerful and commanding story, one can get a better understanding about the mysteries surrounding this nation which has been severely abused by the domination of American racism. The term nation is used in this description for three reasons. First, contrary to popular belief, not all people designated as "colored" were brought to North America on slave ships and in chains. Thousands of the ancestors of Louisiana French Creoles emigrated as refugees from the war torn French colonies (Haiti for the most part) in the West Indies. Secondly, those ancestors were educated, wealthy and self-sufficient long before Louisiana became a part of the United Stataes. Therefore, the United Stataes had absolutely nothing to do with their social status. And thirdly, the guarantees stipulated in the Louisiana Purchase Treaty set this community apart from all others - into a category all its own. Now, it can readily be seen that Passe Pour Blanc has a mission to accomplish.

Since the contents of Passe Pour Blancreveal actions and occurences common only to the Creole community, and those actions and occurences are expected to distinguish Louisiana French Creoles from all other nations in America, the readers are challenged to try to appply them to any other group. IfPasse Pour Blanccan be applied as being common to any other ethnic group, then its main purpose has not been served. If it cannot be thusly applied, then this book, although fictionalized, shall take its place among the tremendous amount of evidence, already gathered, which points toward recognized nationhood for Louisiana French Creoles. This author firmly believes that Louisian French Creoles, especially those in and from New Orleans who have been frequenting both sides of the color line for centuries, have no real counterparts. No cultural equivalents.

» Have you read this book? We'd like to know what you think about it - write a review about Passe Pour Blanc: Creole Secrets book by GILBERT MARTIN and you'll earn 50c in Boomerang Bucks loyalty dollars (you must be a Boomerang Books Account Holder - it's free to sign up and there are great benefits!)


A Preview for this title is currently not available.
More Books By GILBERT MARTIN
View All