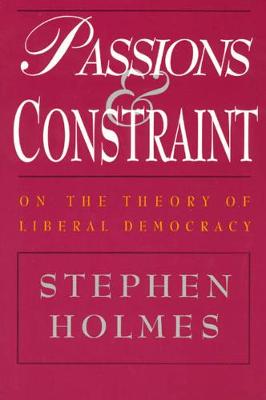 On the Theory of Liberal Democracy New edition

In this collection of essays on the core values of liberalism, Stephen Holmes?noted for his scathing reviews of books by liberalism's opponents?challenges commonly held assumptions about liberal theory. By placing it into its original historical context, Passions and Constraints presents an interconnected argument meant to fundamentally change the way we conceive of liberalism.

According to Holmes, three elements of classical liberal theory are commonly used to attack contemporary liberalism as antagonistic to genuine democracy and the welfare state: constitutional constraints on majority rule, the identification of individual freedom with an absence of government involvement, and a strong emphasis on the principle of self-interest. Through insightful essays on Hobbes's analysis of the English Civil War in Behemoth, Bodin's writings on the benefits of limited government, and Mill's views on science and politics, Holmes shows that these basic principles provide, to the contrary, a necessary foundation for the development of democratic, regulatory, and redistributionist politics in the modern era.

Holmes argues that the aspirations of liberal democracy?including individual liberty, the equal dignity of citizens, and a tolerance for diversity?are best understood in relation to two central themes of classical liberal theory: the psychological motivations of individuals and the necessary constraint on individual passions provided by institutions. Paradoxically, Holmes argues that such institutional restraints serve to enable, rather than limit, effective democracy.

In explorations of subjects ranging from self-interest to majoritarianism to "gag rules," Holmes shows that limited government can be more powerful than unlimited government?indeed, that liberalism is one of the most effective philosophies of state building ever contrived. By restricting the arbitrary powers of government officials, Holmes states, a liberal constitution can increase the state's capacity to focus on specific problems and mobilize collective resources for common purposes.

Passions and Constraint is an assessment of what that tradition has meant and what it can mean today.

» Have you read this book? We'd like to know what you think about it - write a review about Passions and Constraint book by Stephen Holmes and you'll earn 50c in Boomerang Bucks loyalty dollars (you must be a Boomerang Books Account Holder - it's free to sign up and there are great benefits!)


A Preview for this title is currently not available.
More Books By Stephen Holmes
View All