A Study of Human Nature

A survey of astonishing breadth and penetration. No cognitive neuroscientist should ever conduct an experiment in the domain of the emotions without reading this book, twice.
Parashkev Nachev, Institute of Neurology, UCL
There is not a slack moment in the whole of this impressive work. With his remarkable facility for making fine distinctions, and his commitment to lucidity, Peter Hacker has subtly characterized those emotions such as pride, shame, envy, jealousy, love or sympathy which make up our all too human nature. This is an important book for philosophers but since most of its illustrative material comes from an astonishing range of British and European literature, it is required reading also for literary scholars, or indeed for anyone with an interest in understanding who and what we are.
David Ellis, University of Kent

Human beings are all subject to boundless flights of joy and delight, to flashes of anger and fear, to pangs of sadness and grief. We express our emotions in what we do, how we act, and what we say, and we can share our emotions with others and respond sympathetically to their feelings. Emotions are an intrinsic part of the human condition, and any study of human nature must investigate them. In this third volume of a major study in philosophical anthropology which has spanned nearly a decade, one of the most preeminent living philosophers examines and reflects upon the nature of the emotions, advancing the view that novelists, playwrights, and poets - rather than psychologists and cognitive neuroscientists - elaborate the most refined descriptions of their role in human life.
In the book's early chapters, the author analyses the emotions by situating them in relation to other human passions such as affections, appetites, attitudes, and agitations. While presenting a detailed connective analysis of the emotions, Hacker challenges traditional ideas about them and criticizes misconceptions held by philosophers, psychologists, and cognitive neuroscientists.
With the help of abundant examples and illustrative quotations from the Western literary canon, later sections investigate, describe, and disentangle the individual emotions - pride, arrogance, and humility; shame, embarrassment, and guilt; envy and jealousy; and anger. The book concludes with an analysis of love, sympathy, and empathy as sources of absolute value and the roots of morality.
A masterful contribution, this study of the passions is essential reading for philosophers of mind, psychologists, cognitive neuroscientists, students of Western literature, and general readers interested in understanding the nature of the emotions and their place in our lives.

Other Editions - The Passions by P. M. S. Hacker 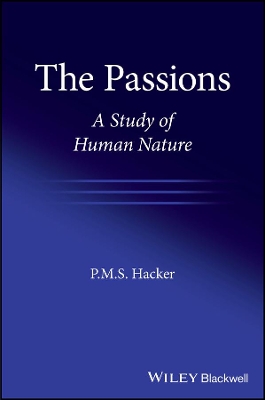 » Have you read this book? We'd like to know what you think about it - write a review about Passions book by P. M. S. Hacker and you'll earn 50c in Boomerang Bucks loyalty dollars (you must be a Boomerang Books Account Holder - it's free to sign up and there are great benefits!)

A Preview for this title is currently not available.
More Books By P. M. S. Hacker
View All

Wittgenstein: Meaning and Mind (Volume 3 of an Analytical Commentary on the Philosophical Investigations), Part 1: Essays
$143.03 $145.95