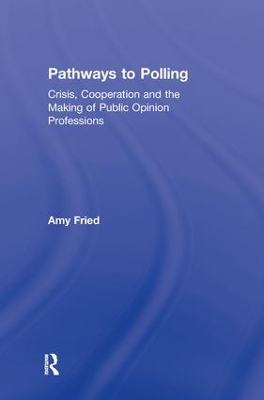 Crisis, Cooperation and the Making of Public Opinion Professions

In midcentury America, the public opinion polling enterprise faced a crisis of legitimacy. Every major polling firm predicted a win for Thomas Dewey over Harry Truman in the 1948 presidential election--and of course they all got it wrong. This failure generated considerable criticisms of polling and pollsters were forced to defend their craft, the quantitative analysis of public sentiment. Pathways to Polling argues that early political pollsters, market researchers, and academic and government survey researchers were entrepreneurial figures who interacted through a broad network that was critical to the growth of public opinion enterprises. This network helped polling pioneers gain and maintain concrete, financial support to further their discrete operations. After the Truman-Dewey debacle, such links helped political polling survive when it could have just as easily been totally discredited. Amy Fried demonstrates how interactions between ideas, organizations, and institutions produced changes in the technological, political, and organizational paths of public opinion polling, notably affecting later developments and practice.
Public opinion enterprises have changed a good deal, in the intervening half century, even as today's approaches have been deeply imprinted by these early efforts.

Other Editions - Pathways to Polling by Amy Fried » Have you read this book? We'd like to know what you think about it - write a review about Pathways to Polling book by Amy Fried and you'll earn 50c in Boomerang Bucks loyalty dollars (you must be a Boomerang Books Account Holder - it's free to sign up and there are great benefits!)

Amy Fried is professor of Political Science at the University of Maine. She maintains her own blog on public opinion polling. Please visit http://www.pollways.com for more.

A Preview for this title is currently not available.
More Books By Amy Fried
View All