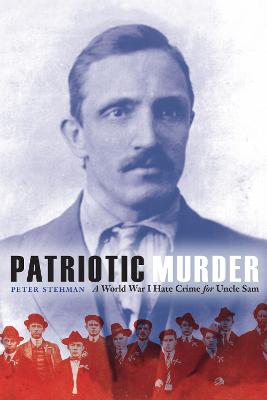 Robert Prager, a lonely German immigrant searching for the American dream, was probably the most shameful U.S. casualty of World War I. From coast to coast, Americans had been whipped into a patriotic frenzy by a steady diet of government propaganda and hate-mongering. In Collinsville, Illinois, an enraged, drunken mob hung Prager from a tree just after midnight on April 5, 1918. Coal miners in the St. Louis suburb would show the nation they were doing their patriotic part - that they, too, were fighting the fight. And who would stop them anyway? Not the alderman or businessmen who watched silently. Not the four policemen who let Prager from their custody, without drawing a weapon. And who would hold the mob leaders accountable? Certainly not the jury that took just ten minutes to acquit them, all while a band played "The Star-Spangled Banner" in the courthouse lobby.

Peter Stehman sheds light on the era's hijacking of civil liberties and a forgotten crime some might say has fallen prey to "patriotic amnesia." Unfortunately, the lessons from Patriotic Murder on intolerance and hate still resonate today as anti-immigration rhetoric and uber-nationalism have resurfaced in American political discussion a century later.

» Have you read this book? We'd like to know what you think about it - write a review about Patriotic Murder: A World War I Hate Crime for Uncle Sam book by Peter Stehman and you'll earn 50c in Boomerang Bucks loyalty dollars (you must be a Boomerang Books Account Holder - it's free to sign up and there are great benefits!)