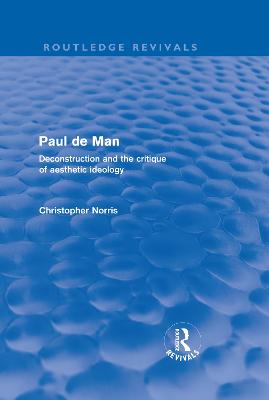 Deconstruction and the Critique of Aesthetic Ideology

Paul de Man - literary critic, literary philosopher, "American deconstructionist" - changed the landscape of criticism through his rigorous theories and writings. Upon its original publication in 1988, Christopher Norris' book was the first full-length introduction to de Man, a reading that offers a much-needed corrective to the pattern of extreme antithetical response which marked the initial reception to de Man's writings.

Norris addresses de Man's relationship to philosophical thinking in the post-Kantian tradition, his concern with "aesthetic ideology" as a potent force of mystification within and beyond that tradition, and the vexed issue of de Man's politics. Norris brings out the marked shift of allegiance in de Man's thinking, from the thinly veiled conservative implications of the early essays to the engagement with Marx and Foucault on matters of language and politics in the late, posthumous writing. At each stage, Norris raises these questions through a detailed close reading of individual texts which will be welcomed by those who lack any specialised knowledge of de Man's work. 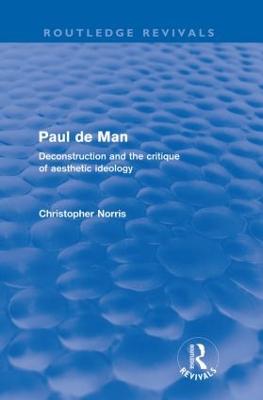 » Have you read this book? We'd like to know what you think about it - write a review about Paul de Man book by Christopher Norris and you'll earn 50c in Boomerang Bucks loyalty dollars (you must be a Boomerang Books Account Holder - it's free to sign up and there are great benefits!)

A Preview for this title is currently not available.
More Books By Christopher Norris
View All