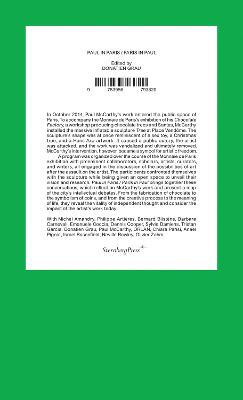 Paul in Paris / Paris in Paul

Description - Paul in Paris / Paris in Paul by Donatien Grau

In October 2014, Paul McCarthy's work entered the public space of Paris. To accompany the Monnaie de Paris's exhibition of his Chocolate Factory, a workshop producing chocolate trees and Santas, McCarthy installed the massive inflatable sculpture Tree at Place Vend me. The sculpture's shape was at once reminiscent of a sex toy, a Christmas tree, and a Hans Arp artwork. It caused a public outcry, the artist was attacked, and the work vandalized and ultimately removed.McCarthy's intervention, however, became a symbol for artistic freedom. A program was organized over the course of the Monnaie de Paris exhibition with preeminent collaborators, scholars, artists, curators, and writers, all engaged in the discussion of the possibilities of art after the assault on the artist. The participants confronted themselves with the sculpture while being given an open space to unveil their vision and research. Paul in Paris / Paris in Paul brings together these conversations, which reflect on McCarthy's work and present a map of the city's intellectual debates. From the fabrication of chocolate to the symbolism of coins, and from the creative process to the meaning of life, they reveal the vitality of independent thought and consider the impact of the artist's work today.
Contributors
Michel Amandry, Philippe Arti res, Bernard Blist ne, Barbara Carnevali, Emanuele Coccia, Dennis Cooper, Sylvie Damiens, Tristan Garcia, Donatien Grau, Paul McCarthy, ORLAN, Chiara Parisi, Anael Pigeat, Israel Rosenfield, Neville Rowley, Olivier Zahm

» Have you read this book? We'd like to know what you think about it - write a review about Paul in Paris / Paris in Paul book by Donatien Grau and you'll earn 50c in Boomerang Bucks loyalty dollars (you must be a Boomerang Books Account Holder - it's free to sign up and there are great benefits!)


A Preview for this title is currently not available.
More Books By Donatien Grau
View All