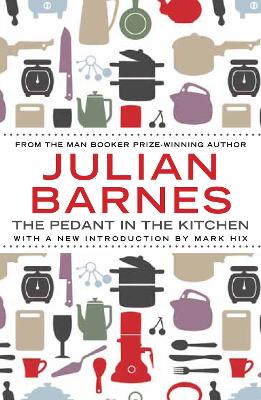 The Pedant In The Kitchen

Description - The Pedant In The Kitchen by Julian Barnes

The Pedant's ambition is simple. He wants to cook tasty, nutritious food; he wants not to poison his friends; and he wants to expand, slowly and with pleasure, his culinary repertoire. A stern critic of himself and others, he knows he is never going to invent his own recipes (although he might, in a burst of enthusiasm, increase the quantity of a favourite ingredient). Rather, he is a recipe-bound follower of the instructions of others.

It is in his interrogations of these recipes, and of those who create them, that the Pedant's true pedantry emerges. How big, exactly, is a 'lump'? Is a 'slug' larger than a 'gout'? When does a 'drizzle' become a downpour? And what is the difference between slicing and chopping? This book is a witty and practical account of Julian Barnes' search for gastronomic precision. It is a quest that leaves him seduced by Jane Grigson, infuriated by Nigel Slater, and reassured by Mrs Beeton's Victorian virtues. The Pedant in the Kitchen is perfect comfort for anyone who has ever been defeated by a cookbook and is something that none of Julian Barnes' legion of admirers will want to miss.

Buy The Pedant In The Kitchen by Julian Barnes from Australia's Online Independent Bookstore, Boomerang Books.

Book Reviews - The Pedant In The Kitchen by Julian Barnes

» Have you read this book? We'd like to know what you think about it - write a review about Pedant In The Kitchen book by Julian Barnes and you'll earn 50c in Boomerang Bucks loyalty dollars (you must be a Boomerang Books Account Holder - it's free to sign up and there are great benefits!)

Julian Barnes is a Booker Prize-winning author who has written nine novels, a book of short stories, and two collections of essays. He has received several awards and honours for his writing including the Somerset Maugham Award for Metroland (1981), and four Booker Prize nominations: Flaubert's Parrot (1984), England, England (1998), Arthur and George (2005) and The Sense of an Ending (Booker Prize Winner 2011).