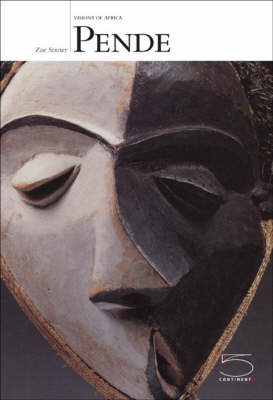 Although many societies in the Congo were once renowned for vibrant masquerades and architectural sculpture, these phenomena have only been studied as living traditions among a handful of peoples, most notably the Pende. Building on the extended fieldwork of numerous researchers since the 1950s, this text offers a unique window into the dynamic performance contexts of both masquerade and architecture in Central Africa. As much as possible, it privileges Pende voices and seeks to understand the inter-relationship between ritual practice and aesthetic form. Attentive to history, the text also shows these artistic practices have responded (sometimes unpredictably) to both colonial and post-colonial pressure. Lavish illustrations feature both iconic and hitherto unpublished masterworks, which have been selected to evoke the full range of Pende expression. AUTHOR: Zoe S. Strother is Associate Professor of African Art at Columbia University in New York. She studied History of Art at Yale University, where she earned a Ph.D. in 1992. Her research is based on thirty-two months of work in eastern Pende and central Pende. She has written extensively on Pende including Inventing Masks: Agency and History in the Art of the Central Pende which received the 'Arnold Rubin Outstanding Publication Award'. 46 colour, 9 b/w images

» Have you read this book? We'd like to know what you think about it - write a review about Pende book by Zs Strother and you'll earn 50c in Boomerang Bucks loyalty dollars (you must be a Boomerang Books Account Holder - it's free to sign up and there are great benefits!)

Z. S. Strother is Riggio Professor of African art at Columbia University in the City of New York. She was trained in art history at Yale University, where she received her Ph.D in 1992. Since then, she has published extensively on African visual culture, including Inventing Masks: Agency and History in the Art of the Central Pende (University of Chicago Press, 1998), which received the the Arnold Rubin Outstanding Publication Award for Original scholarship published between 1998-2000. This research is based on 32 months of fieldwork among the Eastern and Central Pende, 1987-89. Her current research focuses on untangling the history of iconoclasm in Africa.