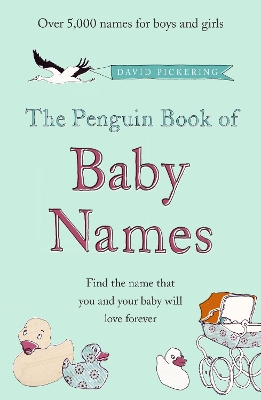 The Penguin Book of Baby Names

Description - The Penguin Book of Baby Names by David Pickering

Of all the decisions a new parent makes, choosing that special name is the most significant, and the most rewarding. This clear, helpful and easy-to-use A - Z guide will give you thousands of brilliant suggestions for picking the perfect name for your new arrival. It includes- Separate sections for boys and girls 5000 names from well-loved favourites to something a little different The most popular celebrity names, from Apple to Tigerlily Top ten names through the centuries Facts about the true meanings and stories behind each name Help make that all-important decision a little bit easier - and give your baby a great start in life!

» Have you read this book? We'd like to know what you think about it - write a review about Penguin Book of Baby Names book by David Pickering and you'll earn 50c in Boomerang Bucks loyalty dollars (you must be a Boomerang Books Account Holder - it's free to sign up and there are great benefits!)

A Preview for this title is currently not available.
More Books By David Pickering
View All

Lectures in Defence of Divine Revelation: Delivered at the Universalist Chapel, in Providence, R. I.
$51.01 $56.68

Lectures in Defence of Divine Revelation: Delivered at the Universalist Chapel
$51.01 $56.68