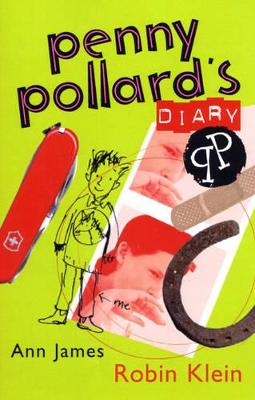 One of Australia s most favourite characters is back!Penny Pollard hates: old people, Annette Smurton (who has her own horse), wearing dresses, and doing homework. On a school excursion she meets someone just as rebellious as herself Mrs Edith Bettany (nearly) eighty-one years old and a new friend for Penny.This is Penny s diary.The Penny Pollard series of books has been read and loved by thousands of children around the world since Penny Pollard s Diary was first published in 1983. Now the first of the classic Australian series has a brand new cover, and a whole new generation of readers can be introduced to this funny, feisty girl who knows her own mind at all times and isn t afraid of anything.

» Have you read this book? We'd like to know what you think about it - write a review about Penny Pollard's Diary book by Robin Klein and you'll earn 50c in Boomerang Bucks loyalty dollars (you must be a Boomerang Books Account Holder - it's free to sign up and there are great benefits!)

Robin Klein is one of the most popular and accomplished writers for children and young adults. Robin s numerous works have won many prizes and have been adapted for both stage and screen. Apart from the Penny Pollard series, her works include Hating Alison Ashley, Came Back to Show You I Could Fly, the Thing series, and Junk Castle. Ann James has been illustrating children s books since 1980 and runs a gallery in Melbourne which specialises in exhibiting book illustrations. Her books include A Pet for Mrs Arbuckle, Dog In, Cat Out, The Midnight Gang and The Butterfly.