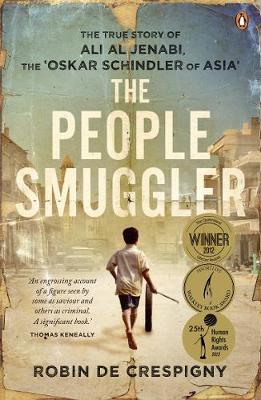 The People Smuggler: The True Story Of Ali Al Jenabi

Robin de Crespigny's The People Smuggler is the gripping, inspring story of one man's escape from Saddam's Iraq to become 'the Oskar Schindler of Asia'.

When Ali Al Jenabi flees Saddam Hussein's torture chambers, he is forced to leave his family behind in Iraq. What follows is an incredible international odyssey through the shadowy world of fake passports, crowded camps and illegal border crossings, living every day with excruciating uncertainty about what the next will bring. Through betrayal, triumph, misfortune - even romance and heartbreak - Ali is sustained by his fierce love of freedom and family. Continually pushed to the limits of his endurance, eventually he must confront what he has been forced to become.

With enormous power and insight, The People Smuggler tells a story of daily heroism, bringing to life the forces that drive so many people to put their lives in unscrupulous hands. At once a non-fiction thriller and a moral maze, this is one man's epic story of trying to find a safe place in the world.

Praise for The People Smuggler

'This is a story every Australian should read . . . a complex mixture of love of family and a hard-edged determination to survive in a brutal, unforgiving world.'
Bruce Elder, Sydney Morning Herald

'The most extraordinary book. It has opened my eyes in a life-changing way.'
Missy Higgins

'A must-read . . . It's an illuminating tale in the context of the asylum-seeker debate . . . A thriller and an inspirational story.'
Jane Sullivan, Saturday Age

'As gripping as it is chilling.'
Paul Morgan, Australian Book Review

'A story that had to be told.'
Weekend Australian

'Tight, powerful and extraordinarily well written. A book which glories in the strength, courage and compassion of the human spirit.'
Bruce Haigh, Canberra Times

'While giving us the details of Al Jenabi's plight, the dramatic narrative holds strong . . . Compelling.'
Dianne Dempsey, The Age

'An epic story full of dramatic reversals and cinematic cliff-hangers . . . Ali emerges as an unlikely but true-blue hero- resilient, loyal to his mates and protective of those weaker than himself, canny, resourceful, unafraid of sacrifice, a man of honour.'
Jose Borghino, The Australian

'It's gripping, thrilling, humorous and epic. This book is compulsive reading and a story of our times.'
Helen Crompton, West Australian

'It is an utterly gripping portrait of a man . . . attempting to retain his dignity and humanity.'
Midwest Times

'A remarkable tale of one man's odyssey.'
Sunday Mail (Brisbane)

'One of the most immensely readable and most deeply thought-provoking books . . . A reminder of the power of literature to capture stories that not only change the world but also change the way we think.'
Byron Shire Echo

'Just mind-blowing. This moving saga of endurance and bravery could well compel a stone to cry.'
Paul Robinson, QANTAS The Australian Way

'With enormous power and insight, The People Smuggler tells a story of daily heroism, bringing to life the forces that drive so many people to put their lives in unscrupulous hands.'
Imagine

'A gripping account of one man's determination to free himself, his family and his people . . . a fascinating insider's perspective of the underbelly of a global crisis.'
InStyle

'Sometimes, it seems the unlucky just fell to earth . . . nothing to define them as fellow human beings . . . The People Smuggler changed that for me.'
Gail Forrer, Noosa News

'This book should be compulsory reading to those concerned about asylum seekers, which seems to be a great many of us.'
Pittwater Life

'Ali emerges as an important hero . . . Reveals the strength of the human spirit.'
The Week

'The story of Ali is one of extraordinary courage which contrasts the human capacity for brutality and cruelty with that of compassion and genuine kindness.'
The Chronicle (Toowoomba)


Other Editions - The People Smuggler: The True Story Of Ali Al Jenabi by Robin de Crespigny 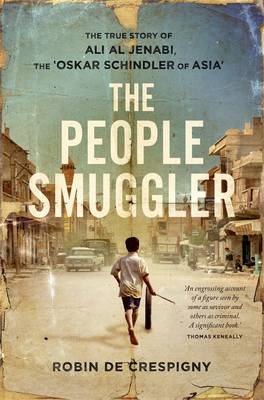 » Have you read this book? We'd like to know what you think about it - write a review about People Smuggler: The True Story Of Ali Al Jenabi book by Robin de Crespigny and you'll earn 50c in Boomerang Bucks loyalty dollars (you must be a Boomerang Books Account Holder - it's free to sign up and there are great benefits!)

Robin de Crespigny has spent three years working with Ali Al Jenabi to write his story. She is a film maker and lives in Sydney. This is her first book.