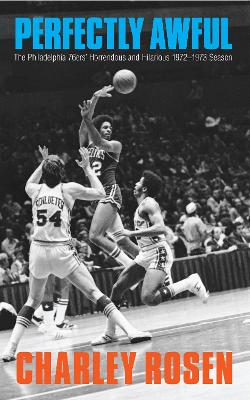 During the 1972-1973 basketball season, the Philadelphia 76ers were not just a bad team; they were fantastically awful. Doomed from the start after losing their leading scorer and rebounder, Billy Cunningham, as well as head coach Jack Ramsay, they lost twenty-one of their first twenty-three games. A Philadelphia newspaper began calling them the Seventy Sickers, and they duly lost their last thirteen games on their way to a not-yet-broken record of nine wins and seventy-three losses.
Charley Rosen recaptures the futility of that season through the firsthand accounts of players, participants, and observers. Although the team was uniformly bad, there were still many memorable moments, and the lore surrounding the team is legendary. Once, when head coach Roy Rubin tried to substitute John Q. Trapp out of a game, Trapp refused and told Rubin to look behind the team's bench, whereby one of Trapp's friends supposedly opened his jacket to show his handgun. With only four wins at the All-Star break, Rubin was fired and replaced by player-coach Kevin Loughery.
In addition to chronicling the 76ers' woes, Perfectly Awful also captures the drama, culture, and attitude of the NBA in an era when many white fans believed that the league had too many black players.

» Have you read this book? We'd like to know what you think about it - write a review about Perfectly Awful book by Charley Rosen and you'll earn 50c in Boomerang Bucks loyalty dollars (you must be a Boomerang Books Account Holder - it's free to sign up and there are great benefits!)

Charley Rosen is a contributor to HoopsHype.com (USA Today Sports) and is the author of more than a dozen sports books, including Crazy Basketball (Nebraska, 2011), Players and Pretenders (Nebraska, 2007), and two books cowritten with NBA coach Phil Jackson.