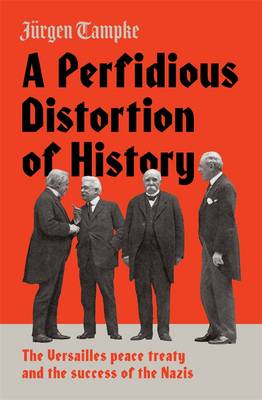 A Perfidious Distortion of History: the Versailles Peace Treaty and the success of the Nazis

Description - A Perfidious Distortion of History: the Versailles Peace Treaty and the success of the Nazis by Jurgen Tampke

The Versailles Peace Treaty, the pact that ended World War I between the German empire and the Allies, has not enjoyed a high reputation among politicians, historians, and opinion-makers since its signing in June 1919. Conventional wisdom has it that, guided by motives of punishment and revenge, and based on the untenable claim that Germany had caused the war, the treaty's chief instigators, United States president Woodrow Wilson, British prime minister David Lloyd George and French prime minister Georges Clemenceau, imposed a Carthaginian peace upon the defeated enemy. Loss of vital industrial and agricultural regions and the imposition of massive reparation payments crippled the economy of the Weimar Republic. This in turn constantly destabilised the Republic's political life. Thus the gentle seeds of democracy that are said to have been sown in the aftermath of the Great War were not allowed to flourish. Instead, the fourteen years of the Republic were marked by perpetual confrontations, setbacks, and unsurmountable difficulties - all linked to the harshness of the Versailles Peace Treaty - which in the end drove the German people into the arms of Adolf Hitler, whose evil potential, of course, no one could foresee. In this authoritative and well-written book, Jurgen Tampke argues that Germany got away with its responsibility for World War I and its behaviour during it; that the treaty was nowhere near as punitive as has been claimed; that the German hyper-inflation of the 1920s was at least partly deliberate policy to minimise the cost of paying reparations; and that WWII was a continuation of Germany's longstanding war aims (which went back beyond WWI to the late nineteenth century). Woodrow Wilson and the US's role also play an important part in this story. 'In this highly readable account Jurgen Tampke tackles the much-debated and perennially fascinating question of whether the Treaty of Versailles caused the Second World War. He comes down firmly on the No side and produces a wealth of evidence and careful analysis to back his arguments. Anyone who is interested in what remains one of modern history's most important debates will want to read this.' - Margaret MacMillan 'An interesting and persuasive account of the Treaty of Versailles. Hopefully, J3rgen Tampke's new book will help to lay to rest the persisting myths about the 1919 peace-making with Germany.' - Emeritus Professor, David Walker FASSA, FAHA ' A fascinating and well-crafted account of how the peace-treaty of 1919 led to the Second World War - and the reasons may not be the ones you expect.'. - Chris Vening, Reid, ACT

Buy A Perfidious Distortion of History: the Versailles Peace Treaty and the success of the Nazis by Jurgen Tampke from Australia's Online Independent Bookstore, Boomerang Books.

Book Reviews - A Perfidious Distortion of History: the Versailles Peace Treaty and the success of the Nazis by Jurgen Tampke

» Have you read this book? We'd like to know what you think about it - write a review about Perfidious Distortion of History: the Versailles Peace Treaty and the success of the Nazis book by Jurgen Tampke and you'll earn 50c in Boomerang Bucks loyalty dollars (you must be a Boomerang Books Account Holder - it's free to sign up and there are great benefits!)

J3rgen Tampke was born 1944 in Brandenburg, Germany, and migrated to Australia in 1964. He graduated with first-class honours at Macquarie University in 1971 and with a PhD from the Australian National University in 1975. J3rgen occupied the position of associate professor at the School of History, University of New South Wales, before his retirement. He is the author and or editor of numerous books, including Weimar and Nazi Germany and Czech-German Relations and the politics of Eastern Europe.

A Preview for this title is currently not available.
More Books By Jurgen Tampke
View All