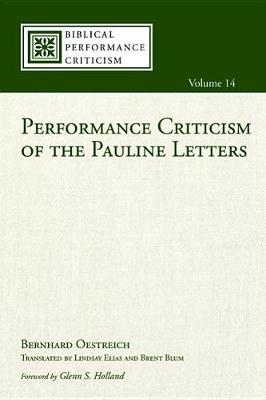 Performance Criticism of the Pauline Letters

Description - Performance Criticism of the Pauline Letters by Bernhard Oestreich

Receiving a letter from Paul was a major event in the early churches. Given the orally oriented culture of the time, a letter was designed to be read out loud in front of an audience. The document was an intermediate state for the local transport of the message, but the actual medium of communication was the performance event. This event was embedded in the written text in a manner comparable to a theater script. After careful preparation because of high expectations from ancient audiences, a presenter embodied the message with his voice, gazes, and gestures and made it not only understood but jointly experienced. After presenting a short history of performance criticism, this book clarifies what is meant by the highly ambiguous term ""performance"" and develops steps to analyze ancient texts in order to find and understand the embedded signals of performance. This leads to a critical assessment of the potential of performance criticism as a method. Then, the method is applied to the Pauline Epistles and other early Christian letters. It proves to be highly rewarding: difficult passages become comprehensible, new aspects come to light, the text's impact on the audience is felt--in short, the texts come alive. ""Bernhard Oestreich makes a compelling case for the importance of performance criticism. His careful account of the discipline's history culminates with the delineation of a methodology that makes performance criticism a tool that other interpreters will be able to use. His application of the method to Pauline texts demonstrates its importance for a full reading of those letters. The new insights and perspectives he unearths through attention to Paul's strategies and the role of the audience in the reception of letters makes this a method that all interpreters need if they are to give these texts a full historical-critical reading. Oestreich has formulated a powerful methodology in the search to hear Paul's letters as the first recipients heard them. All who are engaged in that task will need to give attention to this method and this book."" --Jerry L. Sumney, Professor of Biblical Studies, Lexington Theological Seminary; author of Paul, Apostle and Fellow Traveler (2014) ""This is a masterful work that combines a comprehensive survey of the theoretical foundations of performance criticism with detailed analysis of Paul's major letters. Its distinctive contribution is the identification of the interactions between the performers and audiences of Paul's letters and the interactions between the groups in conflict within those audiences in response to Paul's impassioned pleas for reconciliation and separation. Reading this is like you are there."" --Thomas E. Boomershine, United Theological Seminary, Dayton, Ohio ""Bernhard Oestreich reminds us that early Christian writings were designed to be experienced by the ear. He presents a rigorous scholarly argument for why it is that not only the gospel stories but also the letters of Paul are better understood as a script for a performance than a text that should be quietly read by individuals."" --David Trobisch, Museum of the Bible, Washington, DC Bernhard Oestreich is Professor of New Testament at Friedensau Adventist University, Germany. His ongoing interest in the way a message takes effect, both in biblical times as well as in today's sermon, is reflected in his earlier publications: Metaphors and Similes for Yahweh in the Book of Hosea 14:2-9 (1-8) (1998) and two books on homiletics (2003 and 2015).

Other Editions - Performance Criticism of the Pauline Letters by Bernhard Oestreich

» Have you read this book? We'd like to know what you think about it - write a review about Performance Criticism of the Pauline Letters book by Bernhard Oestreich and you'll earn 50c in Boomerang Bucks loyalty dollars (you must be a Boomerang Books Account Holder - it's free to sign up and there are great benefits!)


A Preview for this title is currently not available.
More Books By Bernhard Oestreich
View All