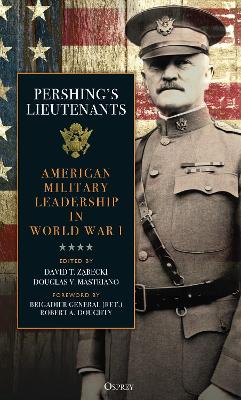 World War I had a profound impact on the United States of America, which was forced to 'grow' an army almost overnight. The day the United States declared war on Germany, the US Army was only the 17th largest in the world, ranking behind Portugal - the Regular Army had only 128,00 troops, backed up by the National Guard with some 182,000 troops. By the end of the war it had grown to 3,700,000, with slightly more than half that number in Europe. Until the United States did so, no country in all history had tried to deploy a 2-million-man force 3,000 miles from its own borders, a force led by American Expeditionary Forces Commander-in-Chief General John J. Pershing. This was America's first truly modern war and rising from its ranks was a new generation of leaders who would control the fate of the United States armed forces during the interwar period and into World War II.

This book reveals the history of the key leaders working for and with John J. Pershing during this tumultuous period, including George S. Patton (tank commander and future commander of the US Third Army during World War II); Douglas MacArthur (42nd Division commander and future General of the Army) and Harry S. Truman (artillery battery commander and future President of the United States). Edited by Major General David T. Zabecki (US Army, Retired) and Colonel Douglas V. Mastriano (US Army, Retired), this fascinating title comprises chapters on individual leaders from subject experts across the US, including faculty members of the US Army War College.

» Have you read this book? We'd like to know what you think about it - write a review about Pershing's Lieutenants: American Military Leadership in World War I book by David T. Zabecki and you'll earn 50c in Boomerang Bucks loyalty dollars (you must be a Boomerang Books Account Holder - it's free to sign up and there are great benefits!)


A Preview for this title is currently not available.
More Books By David T. Zabecki
View All