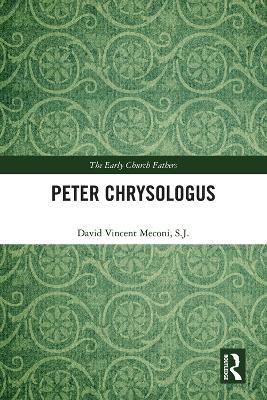 Peter Chrysologus is the first book to offer an introduction to the life of Peter Chrysologus and a selection of his most important sermons in translation, as well as his letter to Eutyches.

Bishop Peter of Ravenna preached before the imperial family for nearly two decades (c. 430-450) after the imperial capital was moved to Peter's See of Ravenna in 402 by Emperor Honorius. With the Empire's elite directly before him, Peter also had the problems of 5th century Monophysitism behind him. As such, his homilies stress the incarnate Christ's ability to change lives by reuniting mortal humans with their life-giving God. The thorough introduction explores the figure of Peter, beginning with the obscure biographies telling of his early life, to his becoming Metropolitan of Ravenna, situating his elevation in the wider socio-political context of the powerful court of Valentinian III and the 5th century Roman West. It also looks at the significant influence his legacy had on future generations.

Translated into a modern idiom, this collection of sermons makes the preaching and pastoral wisdom of this key figure accessible to modern readers. It is an invaluable tool for anyone working on early Christian theology and the Early Church, as well as students of Late Antiquity and the Western Empire.

» Have you read this book? We'd like to know what you think about it - write a review about Peter Chrysologus book by David Vincent Meconi, S.J. and you'll earn 50c in Boomerang Bucks loyalty dollars (you must be a Boomerang Books Account Holder - it's free to sign up and there are great benefits!)


A Preview for this title is currently not available.
More Books By David Vincent Meconi, S.J.
View All